My life dealing with Hurricanes 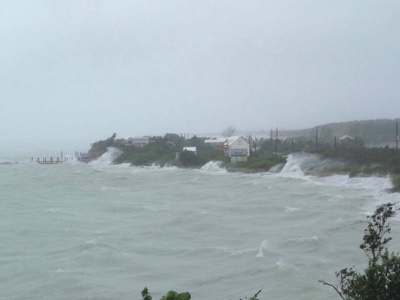 Last weeks wind and waves on Russell Island off of Eleuthera curtesy of hurricane Matthew.
Our house is on the point to the left with the two small pink shutters. The wind in this picture is blowing 65 mph. Rachel and I walked around the shoreline to see how the waves were affecting the different areas. We are at our friends house up on a ridge about 70' above the sea. The fetch in front of our place is 1-1/2 miles and the water is 10' at the deepest. 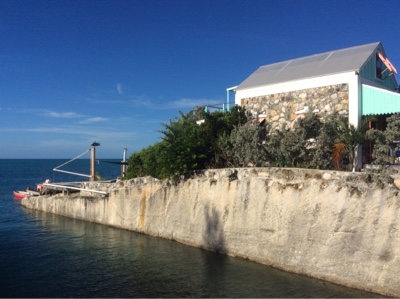 Our home the day before the storm. That's a very high tide. So far that's the highest we have seen the water since we built. It was a harvest moon tide but still about 2-3" higher than we have ever measured. So is it global warming or too many boats in the sea ? The side of our house with the shutters down. Very secure. 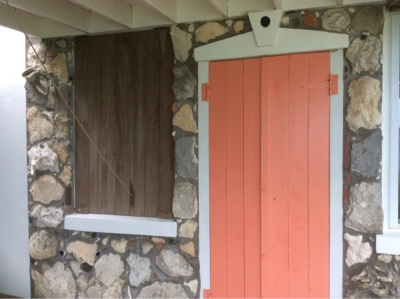 The front of our place facing the sea. The pink doors are only closed for storms. 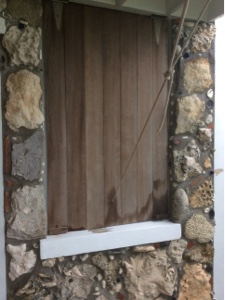 Under the upstairs porch we can lift these heavy Purple Heart shutters with blocks and line led to a cleat on the porch collum. I call it lowering the gates to Mordor when closing up for a blow.
All our house windows are vynel and double pain glass rated to 120 mph winds. I like the shutters over them as even with them covering the windows when it's blowing 110 mph against them you can feel the windows bowing inside. Kinda scary. Three of the houses in our neighborhood don't put on shutters and have been fine. 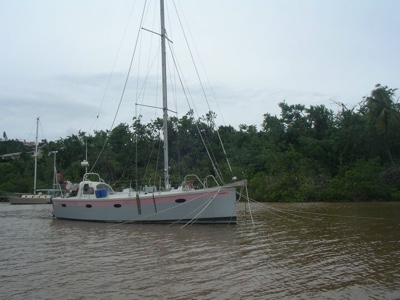 The HFM in Grenada in 2005 after going through hurricane EMILY. plenty anchors out. The eye went over us so we started out facing the shore and ended up going around 180 degrees as the storm passed over us at 90 mph. HFM had at any time 4 anchors spread apart so she was always held strait into the wind. But in the gusts she would lean over about 20 degrees. My wife and daughters stayed with a friend up the hill in a concrete  house built into the hill side. They could not feel a thing. 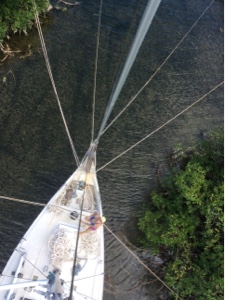 Rachel below on HFM last week. We are anchored in our little slot in the mangroves in 3' of water at high tide on Russell Island. 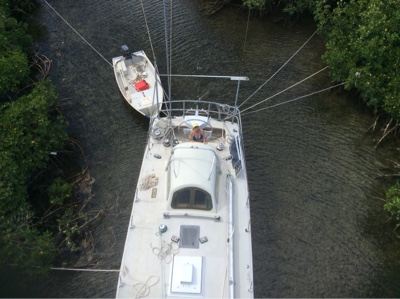 Because hurricane Matthew was predicted to pass over us as a cat 3 storm we put out lots of lines.
22 lines and 5 anchors. But he went to our west and we only felt minimum cat 1. 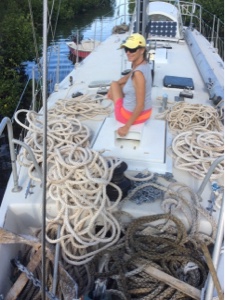 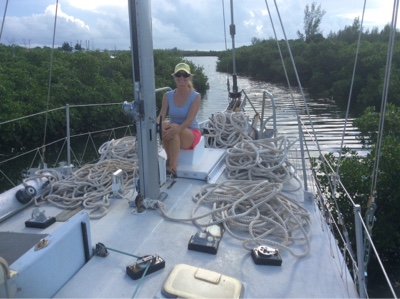 Sorting the rodes on deck. 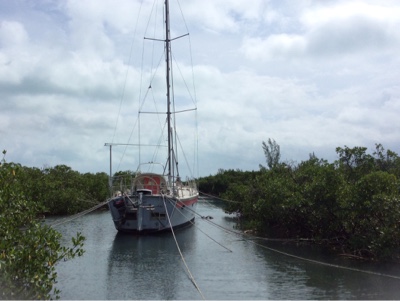 Hogfish is ready for the breeze. 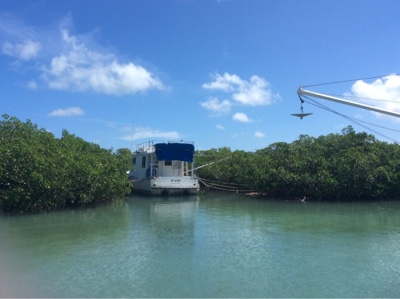 The locals around us cut out these mangrove slips for their boats. They have been doing this for decades. 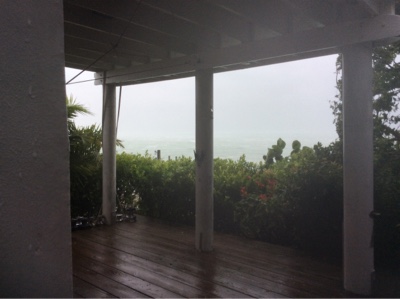 Our front porch during the storm last week. I'am peeking around the leeward house side to get the picture. The collums are a cut up Proctor sailboat mast from a 57' wrecked yacht. 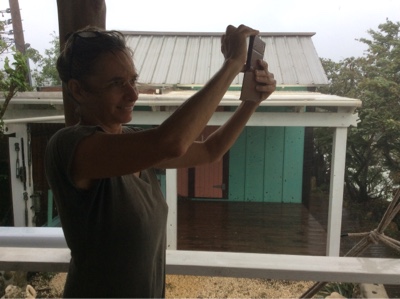 Rachel on our back porch taking pictures. They all end up like pictures of gales at sea. Not very impressive. 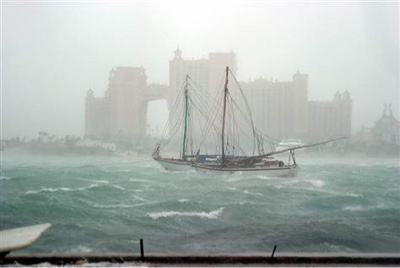 Two Hatian sloops off of the Atlantis resort in Nassau. I hope they made it. Found this picture online. 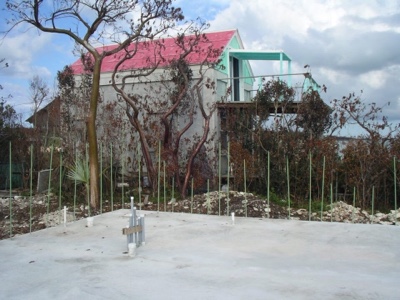 This is our place after hurricane IRENE in 2011. The winds were 110 mph. You can see the trees really got blown and burned by the wind and salt water flying by. 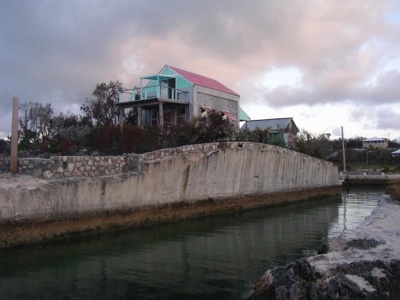 It's kinda sad afterwards but once the burned leaves fall off and it rains they all just seem to rebound quite well. 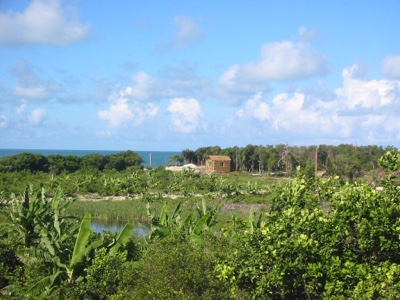 Here's our place when we started in 2002. Just us, a generator and no neighbors. The pond you see was fresh water with fresh water fish in it. 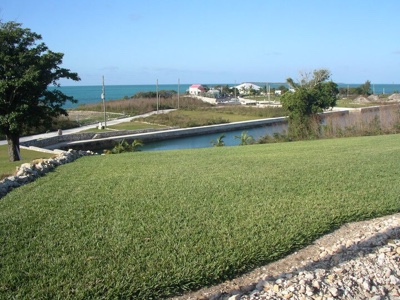 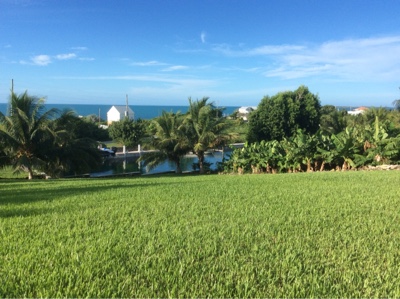 Here we are last week in 2016. Things have grown up. Now there's 18 house around us. Storm is coming in the morning. 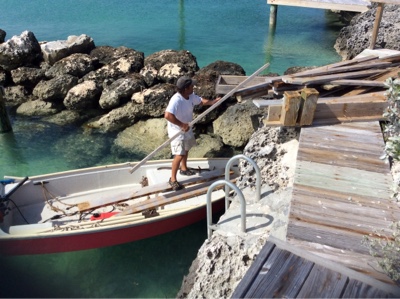 During the storm our small 8x8' dock blew away. I designed it to come loose as I wanted to save the pilings. The dock wood I had salvaged off the shore years ago for free.
I knew that it would be down the shore line on the first beach and sure enough it was. Along with a bunch more planks from other docks. Mine was in one piece but I just took it apart to make it easier to transport back. 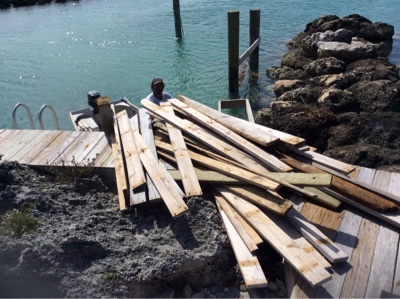 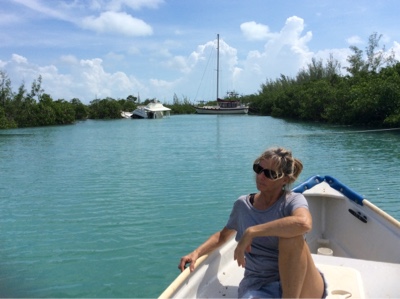 Rachel with one of two boats that sank during the storm. Not from waves but from rain, no bilge pumps and the wind tipping them on their sides.
We have been lucky. But we have been prepared. Both in our home ashore and afloat. I really am glad we have not gone through any cat 3 or worse storms. I will just leave it to my imagination.
Having a home midway down the bowling alley of hurricanes mean you will have to deal with them.
Our island has delt with 65 hurricanes since they started tracking them in the 1800s.
We are slated to have one every 2-1/2 years by the percentage numbers.
Posted by Chris Morejohn at 3:39 PM 3 comments: