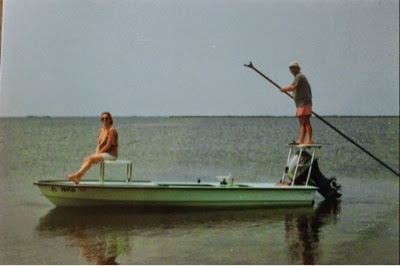 This is the first production Whipray hull # 2 built with the side console and the Yamaha that I asked for. Hull # 1 being the one that I built with the rough deck with the first hull out of the mold. This engine had no where near the power for hole shots and speed that the Mercury 25 had. Of all the Mercury engines the 25, 40 and 60 were the best. But! Sheesh could they be a pain in the butt to start at times. I always cringed when doing a test ride with them as it could sometimes take a bit to get one going. I have in my dighys always used Yamaha 15 two strokes which always start on the first pull. By the time I have around 3,000 plus hours on them I give to a friend and get a new one.
In this picture I am poling Rachel around in the new skiff with Flip's push pole that has a natural wood crook in it for the foot.
I gave to Chris Petterson owner of HBBWs all the original photos of building the molds and skiff # 1
That was done in St. Augustine Florida under a simple plastic visqueen shed. It would be nice if he posts them some day on his site. More to come.....
Posted by Chris Morejohn at 8:18 PM