I have been happily busy designing some new skiffs lately alongside working on 4 new design commissions. I like to jump around during the day going from one idea and project to the next to keep my mind fresh. I find that if I stay on one thing too long I get stale. I like to go to another idea, ruminate and the go back with open eyes. Lots of eraser dust around my desk.
Today I'am sharing ideas of 3 different skiffs doing pretty much the same thing. Getting into shallow water with little HP while being as dry as can be running in a small skiff across a choppy bay. And then being as quiet to pole, row, bird or fish from. 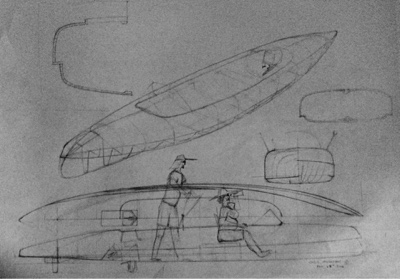 This is my Everglades "Grute" 20.9 concept. I always draw everything out like this before I make my half models. 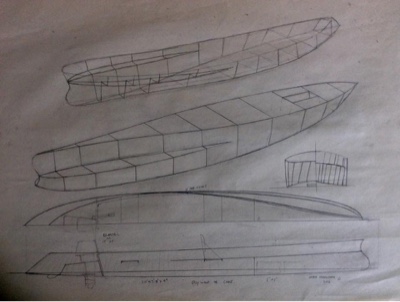 Here's another version but designed to be very simple to build in plywood. 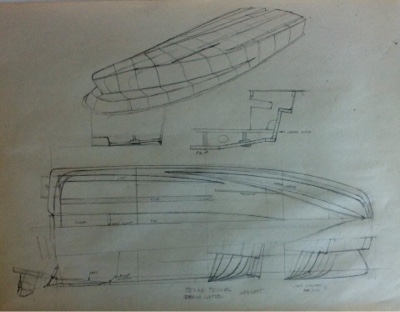 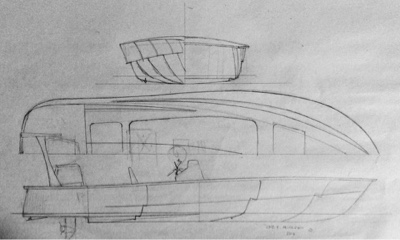 The bottom hull is the " Grute" 20.9 . The idea for this craft came about 32 years ago when my ex wife LaWanda and I had just finished a 10 day trip paddling the length of The Everglades National Park in an 18' aluminum Grumman canoe. We camped out every night on a small patch of dry land or on little docks that the park service provided. We used nails to pitch our tent on these. We had to stick to a daily time skedgual as we had to have permits to use these camp sites. The canoe we rented from an outfitter that would drive us to the start of the passage and pick us up at the end and bring us back to our car. When laying out the trip he was showing us the well traveled route and camp sites. We kept asking " why can't we go through this creek and see this bay"? "Well .... It's very hard to get in there because of the overhang limbs covering the creeks and you will get lost."
We explained that we were seasoned offshore sailors and navigators having used sextents and DR our entire lives. No GPS back then.
"Oh, then let me show you some secrets. Don't tell the park service though. "
We ended up paddling ten miles a day then camping by noon. From there we would take off and fish all the creeks and explore. No one was around. We only saw one other craft in the ten days.
Getting into some of the creeks and bays was a fun challange of sitting in the bottom of the canoe pulling the craft along through the swamp by the overhanging tree limbs. Lots of spider webs and spiders over us but when we emerged into the bay it felt like we had been the first to experience it.Lots of Aligators floating about, the first cast of the fishing rod fought a nice big fresh water Bass, the next a Snook, and then a Tarpon. All in minutes.
The thing that made the outfitter reluctant to show us these gems is that all the shoreline looks the same. When you have to paddle 1-1/2 miles across a bay and find an opening thats hidden by brush
You could spend all day looking if not good at navigation. The charts we had were very accurate so all was needed was to take a bearing, get a heading on the compass and be able to know your cross track error when paddling across in the wind and current.For us it was no big deal. We soon found out that as we approached our hidden opening you could see A very slight water movement which was being caused by numerous large sharks tailing into the current coming out the opening of the new creek. They were looking for unwary fish coming through on the current.Bumbling and paddling over and across these big guys was always exiting.
After this trip I have always dreamed of going back with a craft that  I could sleep in instead of camping ashore. This would end the need for permits and rules. We could then stay in a favorite bay for days.
With the right craft we could slip under all the branches with ease. Using a small gas outboard of 5 hp we could cover miles very quickly and have all day to fish and explore.
This craft would also be great for any shallow explorations and if designed right could cross some very open water to get to these places. It would then be very shallow running to get further and farther away from the pack.
When fishing we would use oars as the beam would be too wide for paddles.
The motor is in a well inside the hull and all weight is centralized. Fully loaded with ten days food she will float in 5" of water.
Grute will have a canvas hood dodger to keep out the rain and bugs at night.
This skiff is to be built in wood or core strips in two halves like when building a multihull. Just glue and glass the two halves together.
I will be posting it's very simple well- tunnel design on my sister site hogfishdesign.wordpress later for clarity. 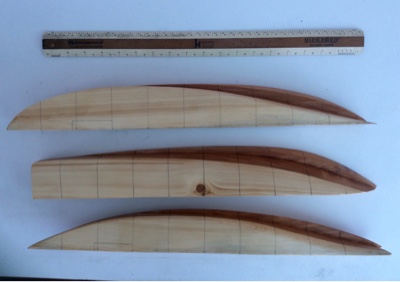 The flat sided and bottomed craft is designed for similar use but being very easy to build in plywood, scrimed core panels or core strips.
Bottoms shown here. 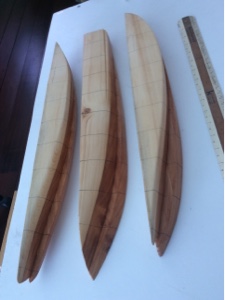 I feel that the current trend of shallow Glades skiffs is to always have the engine on the stern. To me it upsets the hull weight ballance on an already unbalanced long lean hull.
That's why on two of these designs I have drawn in inboard wells and tunnels. This keeps all the weight towards the middle of the hull. The idea in these designs is that they will- can run very level and that stops the pounding in chop and directs the spray to were it belongs. That is not on you.
Yes two of the bows look crazy but there are several bow options and reasons for each.
I will explain in a post soon. 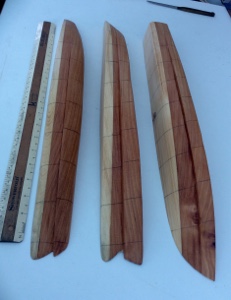 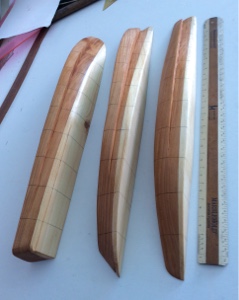 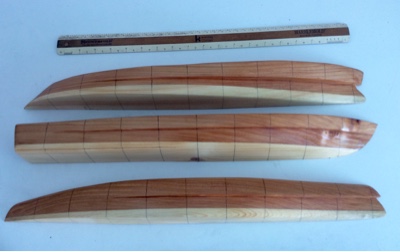 The middle hull is my most recent design for a home built easy to plank up Glades type of skiff. From my past experience I feel I now know how to draw up a very dry running skiff that is shallow draft and very quiet. In this skiff the idea was to have a hull that was easy to build in wood or core. And that looked kinda traditional.
All these skiffs can be seen better at Hogfishdesign.wordpress.
All plans will be available by end of October.
The pictures here make the hulls look slightly distorted, like my brain.
Posted by Chris Morejohn at 10:56 AM