There is a certain amount of pride concerning our "engine less status" that the captain and crew of the sailing vessel Hogfish maximus has shared since her launch in 1999.

Yes, there was a 9.9 "kicker" on the stern for a few years, but it was rarely used and then when put into action was capable of not much beyond getting us to a dock for water in flat calm conditions. Mr. politically incorrect name, which will now be know as PIN, Sir (a Yamaha, what else?) was much appreciated in these times, but spent most its life with us pulled up on the stern bracket out of the water.

We did utilize Mr. PIN Sir beyond the usual, for a memorable Gulf Stream crossing in 2003. We left the Florida Keys laden with supplies for our wee property in the Bahamas. The cargo included three dinghies, bicycles, a fridge (small but effective for a time) tools of all kinds, garden/building/plumbing, you name it we had it (a wheelbarrow!!!) and of course lots of food. There was not much waterline showing and with Grampa, kids, dog and cat, the Captain and I set off with a fair breeze on the stern. The fair breeze pretty much died out rather quickly. Mr. PIN Sir pushed the heavily laden Hogfish maximus across the stream and the Bahama Banks with very little complaint until its energetic thrust ended in the current and confusion of Nassau Harbour, right next to the cruise ships. Of course we anchored and tried to repair but parts were needed and it was time to keep moving so early light we weighed anchor and sailed the rest of the way to our destination. This tale of Mr. PIN Sir's bravery is really his only hurrah. Not much excitement in refilling water tanks before or since it's heroic journey just described.
So, truly we have sailed engine less in the usual sense. No turning on the "iron Genny" when speed dips below such and such knots. I have heard sailors insist on never sailing slower than 5 knots, maybe 3 knots, and there are few who "endure" 2 knots of speed for days on end as we did crossing the Atlantic.

On the east to west traverse we had a knot of current and at times an exhilarating 3 knots was under our hull during the light winds of our crossing. But we had no choice as Mr. PIN Sir, though parts restored and still able to push us along in flat calms, was no use for long range. Besides the Atlantic swell would have been too much for him to work efficiently in.

And yet we loved the sailing and as stated, were proud of our basically engine less, strictly sail status. But the summer of 2009 our status changed.

Enter the perfect motor for Hogfish maximus. A Westerbeke 42. For all the delicious details and diagrams click on the provided link;

In 2005, during Hurricane Emily, a sailboat named Lucky Lady lost its holding in Prickly Bay and landed on Glover's Island to the south of Grenada in the West Indies. The "Lucky" part of the boat's name perhaps being that running into the island during a hurricane stopped the boat and captain from being swept out to sea in 90 knots of wind. For the help the Grenadian Coast guard gave to the Lucky Lady, the captain in turn gave them the Westerbeke 42. Chris then purchased the engine from the Coast guard.

One cylinder had been submerged but otherwise was in great condition with only 326 hours of running time logged on it. With the help of dear friend Gareth, even more dear after spending days in the heat of a Grenadian summer cleaning the entire engine and repairing said cylinder, we had an almost new engine to install in Hogfish maximus.

Chris had planned when designing Hogfish m. for an engine of the size of the Westerbeke. Up until now the "engine room" housed power of another kind. Batteries, kept charged by solar panels and at one time a wind generator as well, (it was too loud, it did very little for us in the less constant winds of the Bahamas and sailing downwind was unusable, and mostly we didn't like it) had their place under the doghouse. Now batteries have a new space created in the nav area after the placement of our engine. Where we once had storage for whatever there is now a 45 gallon fuel tank and the cabin that our eldest child Kalessin vacated, to begin her own search for her own dreams turned realities, has now a slightly narrower bunk and the lockers have tools, spare filters and the etcetteras one would need for that which we have come to know as "Beke G." (thanks again Gareth!!!) Wires and leads and filters and switch panels and all that are also in the cabin.

A personal note, there is still room to sleep and live Kalessin, you haven't been planked, but it is really handy to have the space... thanks! We do love you.

Accessibility is key to engines as they need maintenance and a helpful encouraging look see from time to time (I do this well, the look see and the "good boy" pat) All of the engine is accessible; top hatch removes, port and starboard side have opening doors, front stairs remove for full access and the backside is accessible from both cabins. Panels lift off to access cutlass bearing and shaft. No secrets has our Beke G.! Full disclosure under Hogfish maximus servitude. This makes the drama of having an engine a bit easier to take. Since maintenance is key to good performance, getting to the engine easily is mandatory. Plus, should anything go awry and it is bound to in the worst of circumstances not having to remove half the galley or the entire cockpit and its contents to get to the problem will be a bonus manoeuvre. Good thinking captain, excellent execution of a basic need that is so often ignored! Access!

Ah yes, one may have noticed a bit of a time lag between the acquisition of Lucky Lady's old engine and the actual use of Hogfish maximus' new engine. A few years did pass. Four to be exact. The yet unnamed engine sailed with us from Grenada to the Bahamas under the table (doesn't everybody have an engine in the main salon?) Besides the rocks and bones and wood needed help balancing the boat. That would be another story. This is already getting too long. And it sailed in the same place to north Florida. Then transformation of the interior of Hogfish maximus took place at our friend's dock (thank you Bill and Amy) and engine settled into its new bed for another couple of years. It was another half year before the captain got the nerve to actually drill another hole on the hull. Thanks to Abaco Yacht Services in Green turtle Cay, arguably the best yard in the Bahamas, Chris had the peace of mind to gain the courage to put the shaft in place. So, shaft in place, he sailed back to our wee spot in Eleuthera (I didn't mention anything about propeller did I?) We were given a three bladed bronze prop by Wyatt Huggins and long term friend who had great interest in Hogfish getting into the motoring mode. Thank you, thank you, Wyatt. The propeller had a cozy spot next to the engine down below, dry and barnacle free. Another year passes and back again in Grenada. Chris single handed Hogfish maximus from Eleuthera to Grenada with a stop in St Maartin. Full circle had the Westerbeke travelled without breaking out in a diesel sweat!

Did I mention we liked being strictly sail. The pride thing? And did anyone ever mention a bit of fear of holes in the boat? I did! Looking for the perfect prop as well as just getting to the point of; Okay it is time to bite the bullet and finish the installation of the thing. And so in Grenada is a miracle worker of an engine mechanic named Mike Bingly, co-owner of Palm Tree marine. In him we put our trust and he performed the final wiring task no less than expected. He also went over all systems pertaining to engine and gave Chris the thumbs up. 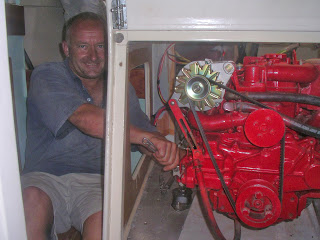 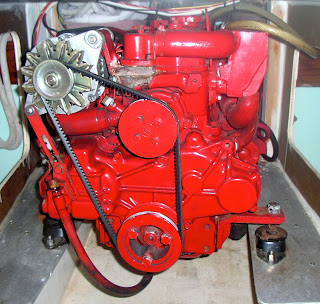 Another professional came by and helped us in the process with a major part he happened to have aboard. And he so gracefully offered to place the propeller on the shaft as well. Thank you Brett Fairhead!!

A few more weeks went by, and a few more sailing months and then all that was needed was the defiling of the boat with the addition of diesel. I mean we just had to put diesel in the tank!

I must confess here I was not keen on the possibility of the boat smelling of engine. I used to get sea sick, still might, given the right circumstance and fear on my part, and worried that my ease at sea would turn to malaise if the engine began burping out diesel fumes and would also just plain stink up my boat! But many friends assured me that engines don't need to be smelly with the correct maintenance (thank you Chris for the all access engine room) and also the addition of Biofuel type substances.

And so it goes.

Bits and bobs of parts bought, found, procured what have you, diesel in, key in hole, button pushed and well, IT WORKS!

And we motored!!! Round and round the anchorage.

And we motor sailed!!! All the way to Carriacou. Such a strange sensation. Even stranger to be at anchor way before sundown, with time to marvel at the miracle of an engine on board that pushes the boat along quite comfortably at sea in all conditions met so far, and also time to go ashore for pizza!

We have even motor sailed DOWNWIND. Just to see what it was like. Eh Captain? "Pretty ridiculous." The quotation still stands therefore no motoring downwind.

I still am amazed at the simple convenience of it all.

Not so simple installation, well, quite simple really, 'just took a long, long, long time and much help from a few good men.

SO - We still sail off anchor and still sail to the mooring (picking up the mooring is another rather crazy tale - perhaps another post and even some unfortunate photos from a helpful bystander er... byfloater? even) and we will still sail through the anchorages as we get from here to there, there to here, funny things are everywhere.*

*if I misquote do i need permission?