14 days sailing to the Leeward islands

It was great to be at sea again with nice bit of open ocean in front of me with only some ships and nothing too big to hit or avoid. This would be my third singlehanded passage down on two different Hogfish designs of mine. I have done the return trip 4 times which can be a lot easier as it should be mostly down wind. This trip is a challenge because you have to make at least 400 miles of easting to get far enough out so that when the trades are encountered you can lay the course down to the islands. On three previous trips with three different boats every trip was different but the easting was made , albeit in rough going for the first 4 days hard on the wind.
The forcast was perfect, the first 3 days the wind was to be in the north and then slowly veer to the NE and by that time I should have been out far enough to catch the trades on down for the last 700 or so miles. The forcast was right on for the first day and night with 20-25 knot winds with the Hogfish close reaching along with "Sinclair" the wind vane steering perfectly or I should say steering well enough that I could stay out of the wet and wind. This was to be our first real offshore passage together and I had to figure out all of his wims and needs. By the end of this trip I can say that this Aries Mark IV vane is the best vane I've every owned.
By day 2 day the wind was dropping out to under 10 knots. I still had to go due east another 300 plus miles before the wind would veer into the east. I can carry 85 gallons of diesel onboard but never have more than 20 gallons in the tank. We just don't motor that much. I left with a total of 30 expecting this to last me the whole winter. My mistake . 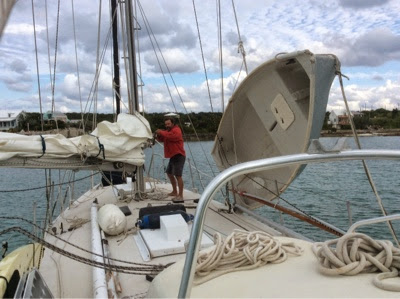 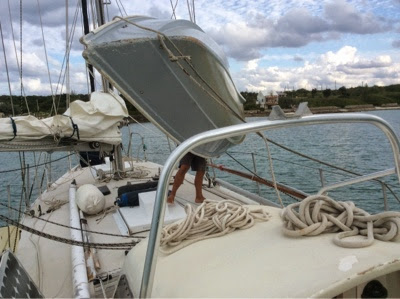 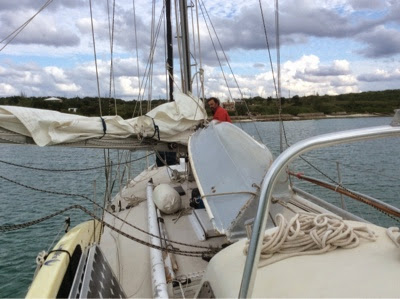 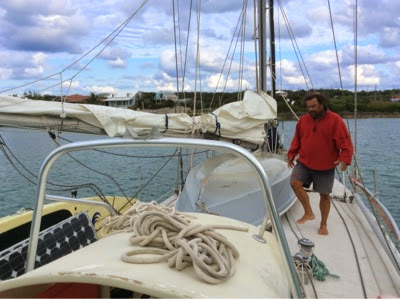 Stowing our 12'3" fiberglass dinghy on deck is very easy with two people but it's just a process doing it alone. This skiff I designed and built to be out sports car, truckster, dive boat, sailboat and our lifeboat. My idea is it will not sink even with a hole in it, it can move instead of just floating about and you can just untie it as the boat goes under and roll it over and bail it out. Of course I'am not a cold weather sailor so I have to limit my disasters to temporate climates. 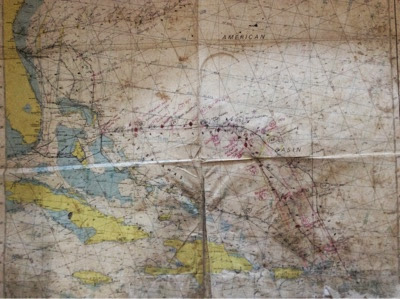 This chart has a few of HFMs passages on it to and from the Caribbean. The red dots are this last trips daily runs. You can see I just got out far enough to lay the Virgins. 650 miles of beating to weather. Glad my girls were flying down as this would not be fun for them. 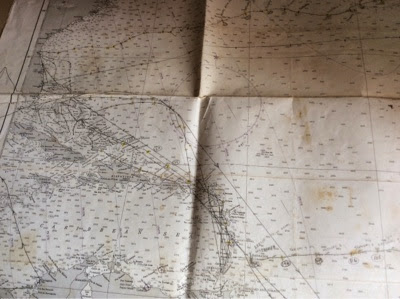 Some other passages in the Hogfish flat bottom line of boats sailed alone or with my family. 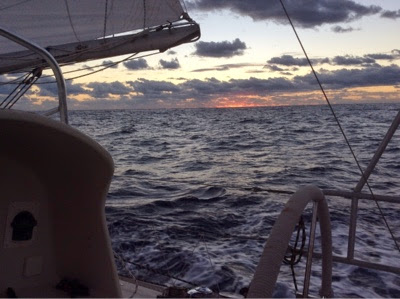 Sunrise on the third day out sailing in a bit of breeze. 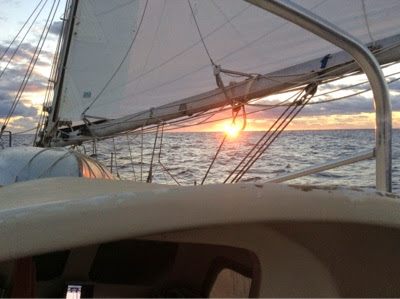 There it is ! Another day but could use a bit more wind , still making eastward progress. 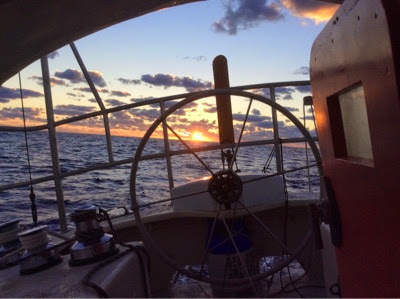 Sunset on day three with "Sinclair" doing the steering.
I reefed  the mainsail 28 times on this trip. Went through 12 squalls that I pulled the jib in while I Steered through them. And used 28 gallons of diesel when it went flat . 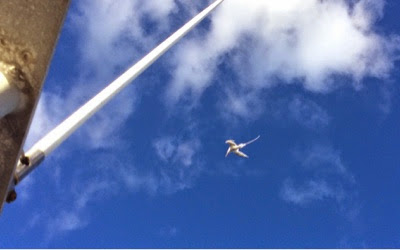 I love Tropic birds. They are almost always in pairs. I wish life was as simple as theirs when all you did was fish all day and think about where you were going to procreate next. Simple life. 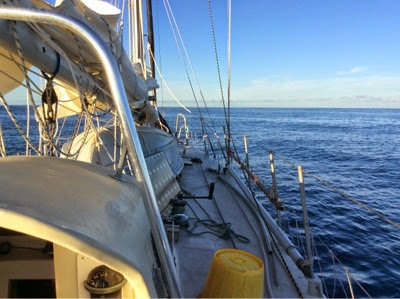 The beginning  of 4 days of next to no wind. This can be lots of fun as you get to see lots of stuff in the water that you would normally not see. 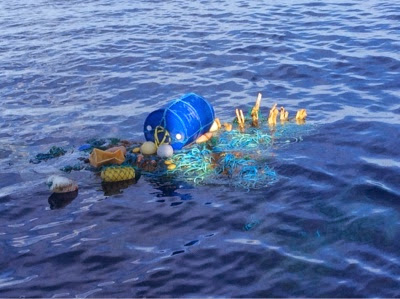 A Dominican fish attractor. You cannot see them but a huge ball of fish down bellow. 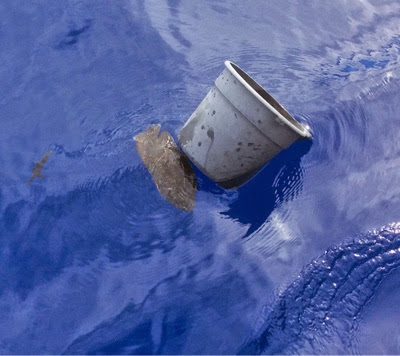 Ghosting by a nice bucket with a Triple Tail fish hanging out. I wanted to swap out our split yellow bucket for this grey one but did not want disturb him and the other small fish. I could spear these fish with my HeadHunters pole spear as they don't move but I was alone and had plenty to eat. 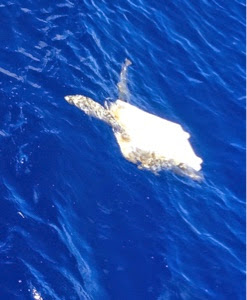 Here's some more that are camouflaging themshelfs in white next to a five gallon jerry jug.
I counted 15 that I passed by. 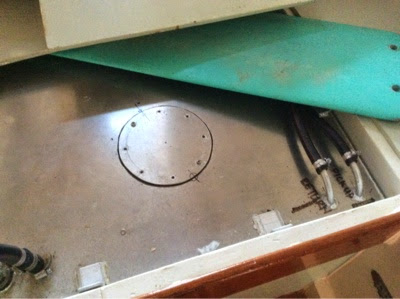 I can open my diesel tanks and look right inside to clean and to really see what's left. Takes a minute. 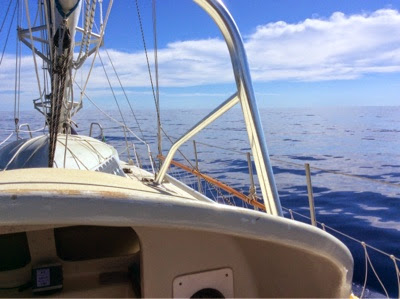 Now it's calm, with next to no swell, I have no electric auto pilot as I don't motor much and don't want to have an expensive thing just hanging around waiting to be used. So I ended up hand steering for 16 hours a day till night. For two nights the wind would come up after 8:00 and we could sail along at 2-3 knots till day light when it would go flat again. It was a nice way to move along at night. I take short naps with a timer at night lasting 15 minutes each. I'am always rested. 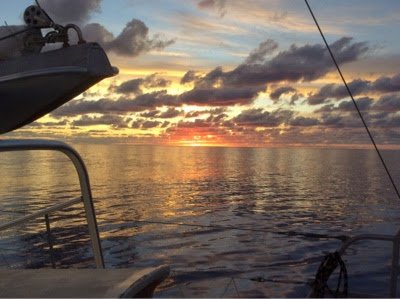 Sunrise after being becalmed all night long. I had 2 gallons of fuel left so I just drifted all night moving south 6 miles in 18 hours. 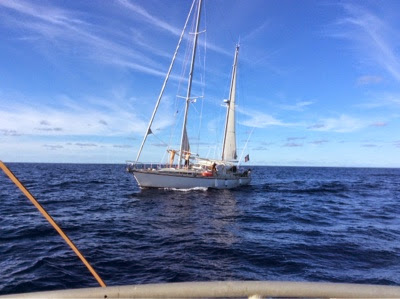 The Wind started to pic up on the 7 th day out and this French sloop came by to ask for cigarettes as they had run out 5 days ago sailing from the Canary Islands heading to the Bahamas. I don't smoke 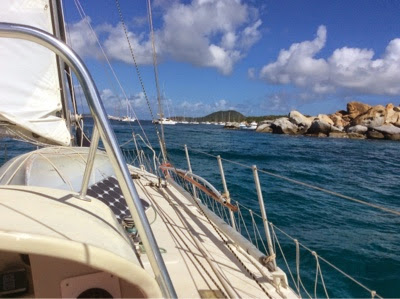 Six days more of sailing hard on the wind I was just able to lay the Annagodda passage and sailed into Virgin Gorda in the BVIs . The wind had headed me going into the SE so I decided to see an old friend Argorn in Beef Island. The BVIs are packed with boats. It was a Hugh culture shock to be suddenly trust back into a world of hundreds of very expensive boats to avoid. But the BVIs are very pretty. 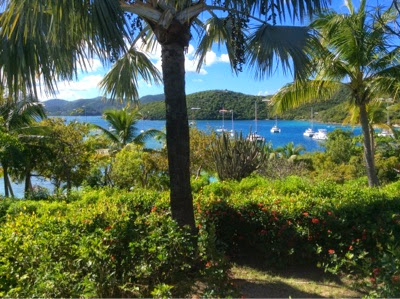 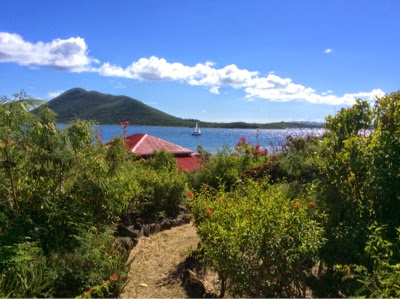 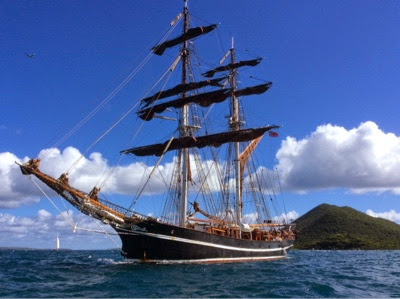 Lots of boats , and vacationing people. With Hogfishes shallow draft I was able to anchor in 3' of water so could stay away from all the liabilitys of so many boats. 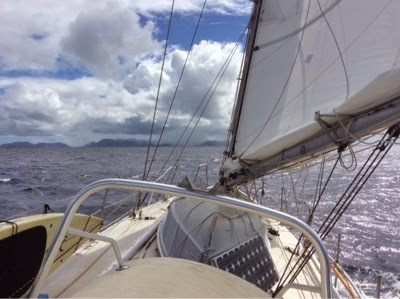 After my visit with Argorn and a few cold beers i made landfall at St. Martin sailing 98 miles tacking to weather in 20 knot winds to cover the 78 mile direct course to get here taking 26 hours. I passed by within a mile of Anguilla and its out laying islands . Ahead is the French side of St. Martin. 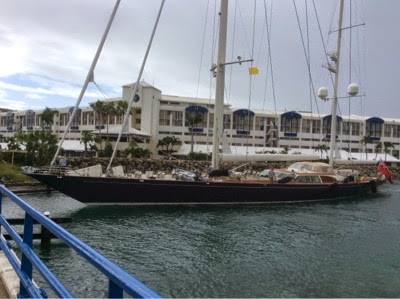 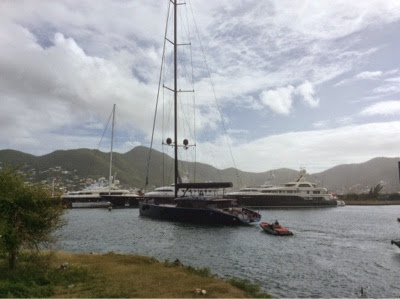 I'am now in St. Martin waiting for Rachel and our dog Bequia to fly in. This island is the busiest place in the islands for yachts and turist. It's nosiey , tons of traffic, good food and lots of good people watching but I can't wait to get out of here. Soon they come.
The best part is beers are only a dollar and rum drinks only two!!! So I can relax after a day's work on the Hogfish and talk to all kinds of real sailors from all over the world.
Next stop Saba ... Talk soon.
Posted by Chris Morejohn at 8:03 PM