The skiffs of Dominica, and the Boat Boy Mafia

Through out the islands of the West Indies you will encounter many types of characters coming up along side your vessel trying to engage you in hiring them in some form of capacity to sell you something. These are know as Boat Boys. In days gone by they would meet you way offshore paddling an old windsurfer or on a make shift raft. Today they zoom up in nice little fast wooden skiffs with big outboards at breakneck speeds to be the first on the scene to hopefully claim you as theirs.

Years ago we had many very unpleasant experiences with these guys trying to politely tell them to stay away from our top sides and no we did not want for a thing and did not want to rent a mooring.
They , but not all of them would try and intimidate you with their skiffs as you would be sailing in after you declined their offers. Lots of charterers and other sailors would just give in and follow them to the appointed mooring buoy which the Boat Boy would be holding up from his skiff asking for the nights payment as the charterers would be grabbing the buoy line. The Boat Boy and his skiff banging along side till the cash was in hand, then taking off to the next victim. The unsuspecting boater would be so glad to have this skiff gone from the side of his boat that they paid him as quick as possible to get him off and away.
Now safely on their mooring they would settle back into the cockpit to relax and then start to realize that the boat next to them was dragging onto them. Sheesh ! But how can this be that the boat astern is dragging its bow into our stern !
Well the Boat Boys realize that to foreigners all their brightly painted skiffs kinda look alike so handing them a mooring buoy that is tied to an old 15 hp outboard is a good way to make a living. Said boat pays them, off they go to another mooring that is fake or not. While the latest victim is dragging down wind the next one is coming in the harbor and can see this going on so wants a good mooring so on goes the process.
The best place to see this Racket is in Admiralty Bay in Bequia. I anchored there for a month a few years ago watching this scam go on. I dove the entire harbor and would say that over half the moorings there can just about hold a dinghy, not an 18 ton Catamaran.
When sailing into Mindelo bay in the Cape Verde islands in 2004 we knew in advance of the potential crime and dinghy theft. The deal that was waiting for us was there would be at least 5-6 Boat Boys in small rowing craft that would be waiting for you at the harbors entrance to offer their services of guarding your dinghy from the others so it would not get stolen. They would ask for 5-6 euros a day for this service. So basically the deal was pay us or your skiff is a goner.
Knowing this in advance we sailed into the bay after a 7 day passage from the Canaries in the early morning. The Hogfish Maximus at that time sailed engine less so we were under full sail for the tack up the bay. Sure enough after rounding the breakwater 5 Boat boys awaited us in their 12" rowboats . They all started after the Hogfish but we were under sail and not power so this was to be a new challenge to them . They understood sailing so could see where our first tack would end up. Off they rowed racing each other to our possible tacking spot. Watching this go on as I threaded my way through all the anchored ships and yachts, I tacked 100' short of where they were waiting to grab ahold of our rail . Bam, off they all go chasing us onto the next tack. After playing with them for 3 more evasive tacks I was left with one Boat Boy following us up the anchorage till we anchored. Breathless, he came alongside and very politely offed his services. We struck our deal at 2 euros a day.
Later that day as we came alongside the dinghy dock he was there along with his competition. He could not belive I was still chaining my skiff up with 3/8" chain. I explained I did not trust anyone watching my skiff including the other yachties.
Today in Portsmouth Dominica the Boat Boys have formed an association and take their business very seriously. They are very polite , have fenders for the skiffs and understand that not all of us sailors have deep pockets. This so far was the safest place I've felt in leaving our skiff while out hiking. Still locked up of course. 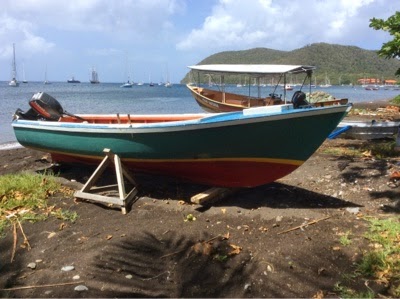 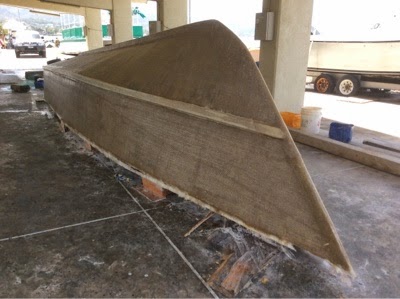 New skiff being built in plywood with a heavy glass skin. 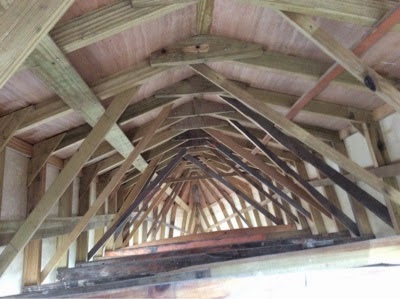 Underside of this skiff. All the supports will be remove when flipping over. 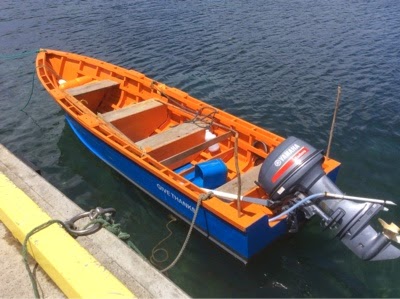 Today's Boat Boy all round skiff used for fishing and working the Yachties during the season.
Very nice running sea boats. 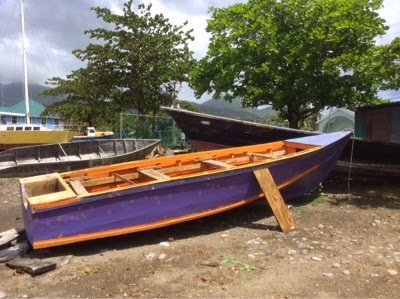 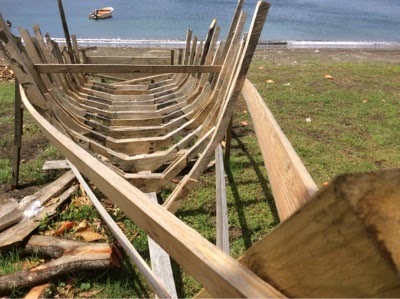 Skiff building on the beach. 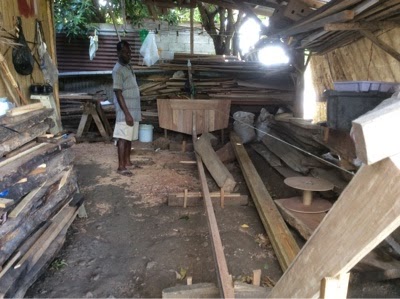 The builder of most of the current skiffs in Portsouth Dominica, Alfonso. Very quiet guy but loved talking skiffs and building. I gave him a jack plane that was my fathers to replace his broken one and a bunch of hand saws. The chunk of curved wood laying on the keelson will be the inside of the stem in the foreground. He's cutting it out with a chainsaw. 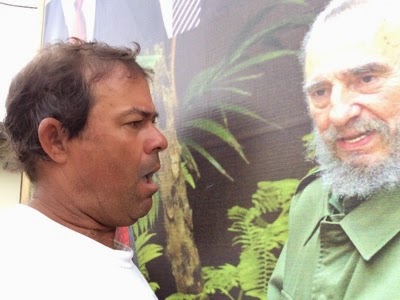 Met this guy in town and he said my Government might let me sail to his country someday. Can this be true ?!!!! If so that's where I'll be for the next bunch of years. My dad was born in Cuba. 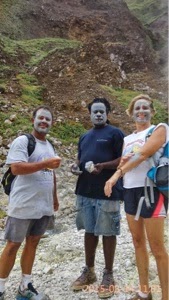 Us with 'Sea Cat ' Boat Boy and hiking Guide  extrodainair . Here we are putting on volcanic mud on our hike to the boiling lake. We have done all our hikes unguided but he came so highly recommended for the way he explained the world about you we hired him and had a great time. 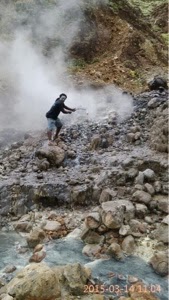 Sea Cat boiling eggs for us in the thermal vents. 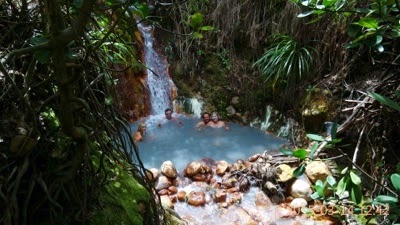 Gayle , Tim , me and Rachel in the hot thermal sulfur water run off from the volcanic vents upstream.
This was a good rest as it's quite a hike to get there and back. 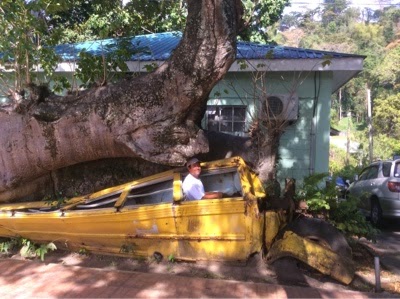 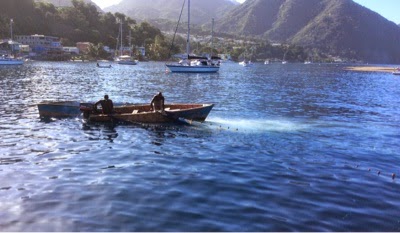 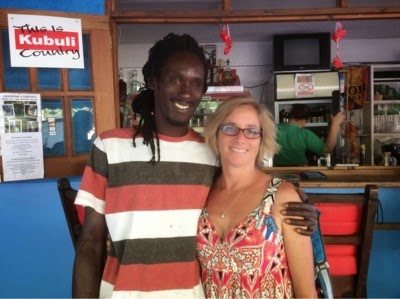 Roseau Boat Boy Desmound. The water is 160' deep up next to the shore but he had moorings placed there that had a good reputation. In the old days you would back your stern up to the beach dropping your anchor in maybe 60' and then tying your stern ashore with a line to someone's house sea wall. Today's moorings are every where so hard to be on your own anymore. $ 10.00 US a night. 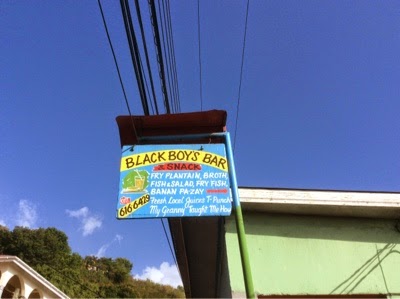 Yes he is , and the beer was very cold. 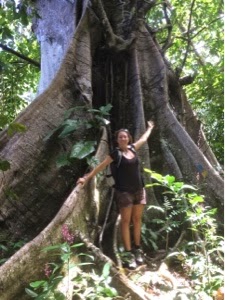 Sara another sailor on hike with us on the north coast. 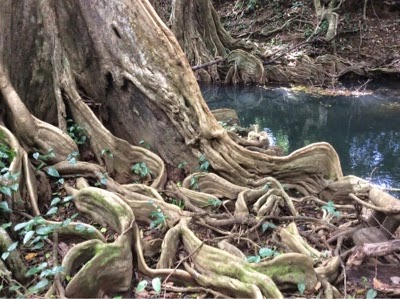 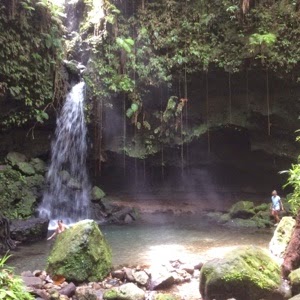 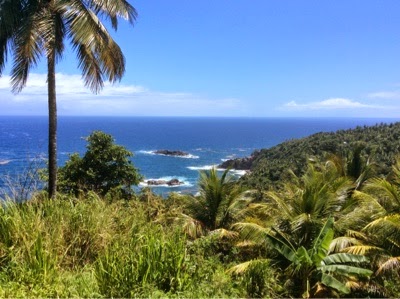 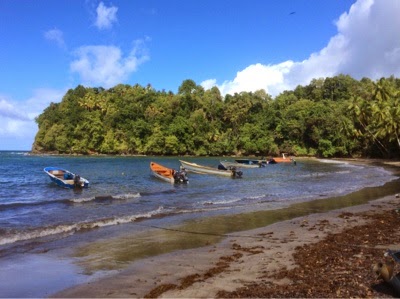 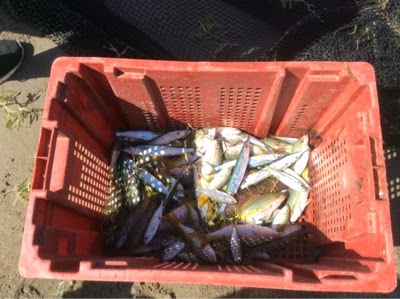 And last , this is a typical fish haul from a huge gill net drawn in along the beach. Thses are all juvenile fish . But that's what's left. They are killing and eating every last thing . Sad.

Dominica has been a wonderful place to sail to and hike about.

Posted by Chris Morejohn at 5:43 PM