Late last year I got an email from a guy saying that he and some buddies had purchased the old Spanish Wells Marina skiff molds that I had designed and made 26 years ago. He had found my blog site and read my story about that project. He asked if I could answer some questions. He said they had been fans of this design for years and wanted to find one to redo for themselves, being avid spearfisherman and had come across the molds in Nassau for sale and wanted to build 3 - one for each of them. One of the partners was a boat builder too so would be doing all the retooling.
This was the start of what's turned out to be a very happy story for an old design that is a good boat being given a second chance and a new and better life.
I emailed Bradley Thornbrough back and gave him my Skype name and said lets talk. Within hours I was talking via the wonders of Skype from our little place in the Bahamas to Bradley, and his partner, the Builder, Eric Brush. They wanted to know all about the history of the boat, what I would change and any recommendations. We talked for over an hour.
I told them that the original boats were tiller driven skiffs with small horse power but went on to have bigger and bigger engines. I had built the first ten skiffs and then turned the shop over to the owners and sailed away. The skiffs over the years had gotten heavier so were riding too low in the water for me and could be wet. I disscussed with Eric my ideal draft. We talked about the fuel tank postion, a full liner for this new upgraded boat. They wanted a stern bracket which I'am not a fan of so I passed on my knowledge of how they have performed on the ones that installed them. I did understand why they wanted one as they were free diving spearfisherman using Hawaiian slings of their own design and liked the stern platform to get in and out of the water in. Also the biggest point was to have a full transom with more cockpit boat space.
They offered to compensate me for future advice. I declined as I live a simple life and don't need every buck that comes my way and I liked these guys right off and wanted to help in any way I could . Plus from looking up Eric's and Bradley's company's web sites I could see right off these guys were people I would want to build my boat. First class.
So off Eric went retooling my 26 year old simple molds, adding a parting flange to the main hull, retooling the entire hull mold, building in steel reinforcing frames on all the hull and deck molds. What I had built had rotted away being left outside for years. I core my molds so that might of helped keep them straight.
Lots of emails followed with questions, and basically asking my opinion on this or that.
The final product has been outstanding. You can see everything on their Facebook page; Spanish Wells Boat Works or www.spanishwellsboatworks.com
With Eric's modern building technology and skills the boat is better than ever. It's been very satisfying to see an old friend come back to life and look so well. So far they have built 3 skiffs all semi-custom.
Thanks guys . 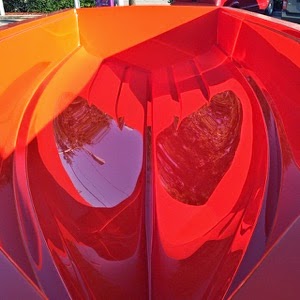 The hull mold is reborn ! 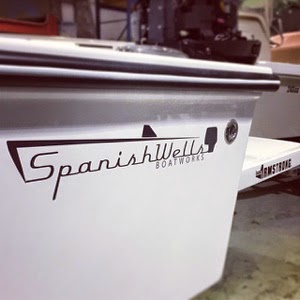 New logo. The original owners in Spanish Wells wanted to name it after me. I told them it should always be associated  with Spanish Wells, not me and I would be gone off sailing.
Worked out well. 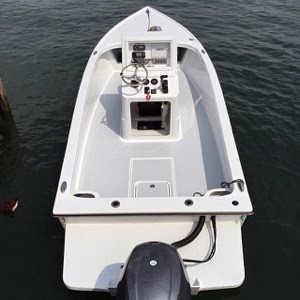 The full stern and bracket. Nice set up . The liner is perfect. This boat would make a great stand up fly fishing skiff for strippers, and offshore fish as it has toe kick. 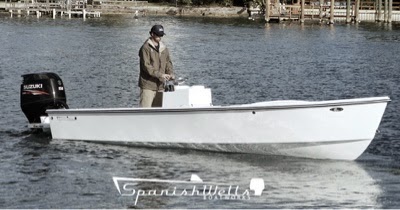 Well said! I own one of the variants you describe and now appreciate (more) how my boat has certain improvements over the others. That the evolution and changes gradually improve the entire lot.

I admire the classic looks of these class of boats & like very much this SWB skiff. Great post! Thanks for writing!

I've always loved the looks of what I called Bahamas skiffs since I first moved to the Bahamas 25 years ago. In 1995 I bought one of the last Blue Runners Gary Kelley built. I loved that boat and had a lot of fun diving and fishing off of it.
It was only a few years ago, upon moving to Eleuthera from Nassau that I found out that the Spanish Wells skiffs were a completely different and better boat than the Albury skiffs…and I've been trying to get my hands on one for the past year.
Funny enough I came across this blog about 3 months ago, recognized your name Chris…and at about the same time came across the New Spanish wells boat project…now, in your most recent post, I learn that you designed the original Spanish wells skiff….how cool is that? Anyways…thanks for designing such a great boat.

People who spend too much time worrying about what others are doing or creating are not paying enough attention to their own work.
There are numerous Bahamian inspired boats out there many of which have very similar lines. No one owns that inspiration and everyone who likes it should improve their own version of it.

I heard how you started with your idea with the layouts. I heard you were at shroud cay and you saw one of the boats and you loved the layouts and went to highbourne cay the next day to get the measurments. The boat you saw my dad had redid and this summer I am redoing one of them with my dad. Cant wait because they are such great boats and I love the way they ride.