Here are some shots of some of the projects that I was involved in during this period. I will be posting many more shots as I get the time. 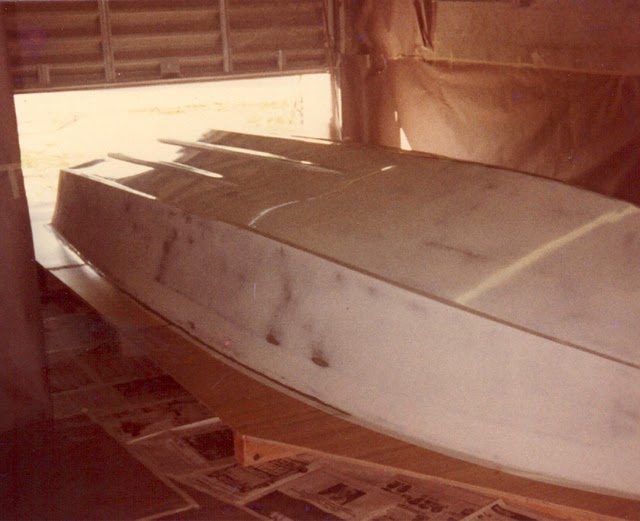 This is the Mako 17 hull with my plug modifications on the bottom and stern , waxed and ready for mold gelcoat and glass. 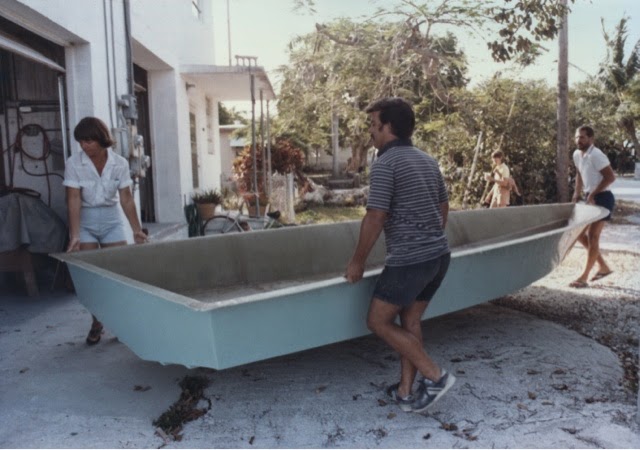 Mako remake hull out of mold, solid glass hull ready for custom interior, 1984 just across the street from Cambells Marina Tavernier Florida Keys. That's Lawnada my ex and Christian Kuerstiner  helping to lift hull into the garage we were renting for a shop. 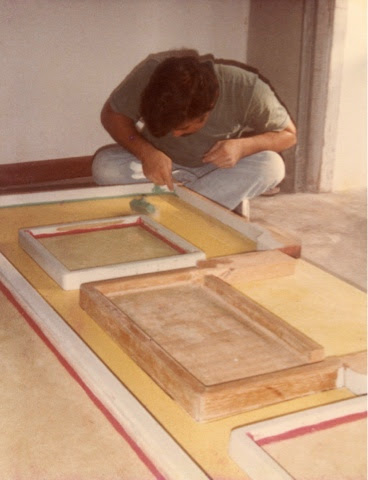 These are the wood plugs I make to form the hatch drain moldings for the decks. The red is clay that becomes the radius edges. Very fast and simple to do. 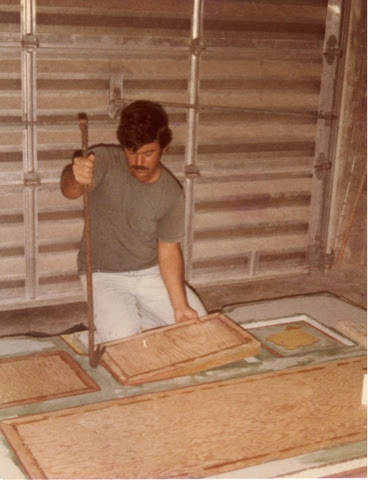 Deck is laid up and flipped over and I am pulling out the hatch moldings. I now have this system down to very few parts. To make a custom deck this way it takes from start to finish about a week. 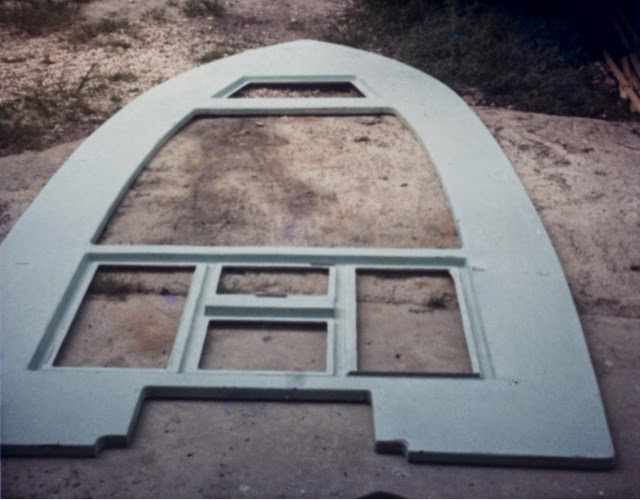 Bert Sherbs deck after all the plugs pulled. This is the deck idea that I believe that Silver King copied.
This deck weighed about 100 lbs 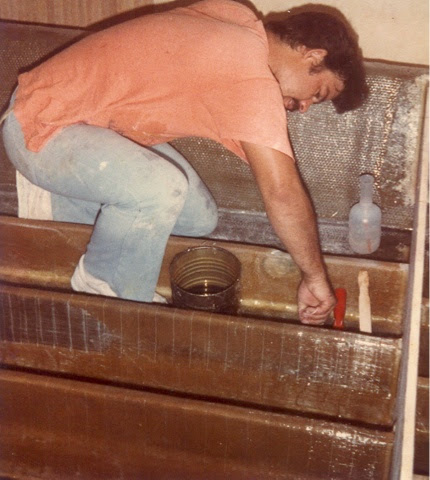 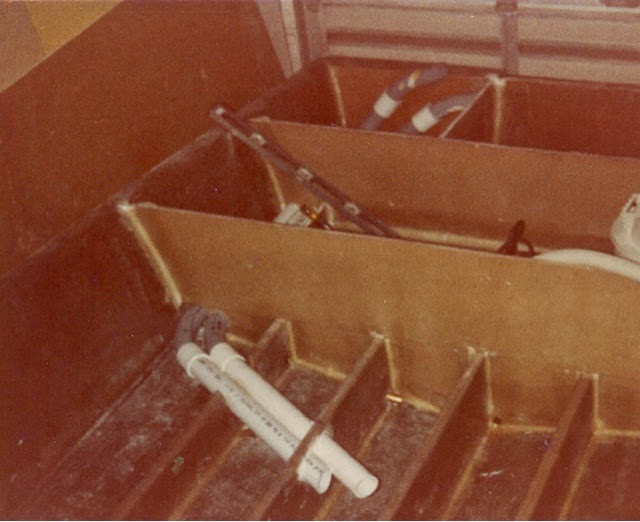 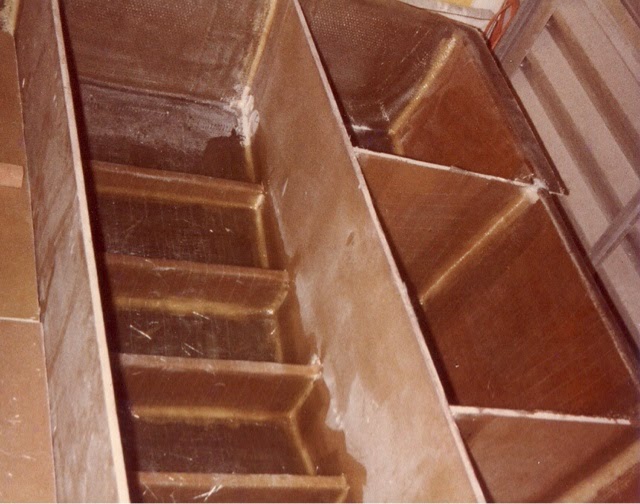 Stern lockers before floors going in. Way over built by my standards today as hull would be all core so would not need the stringer. 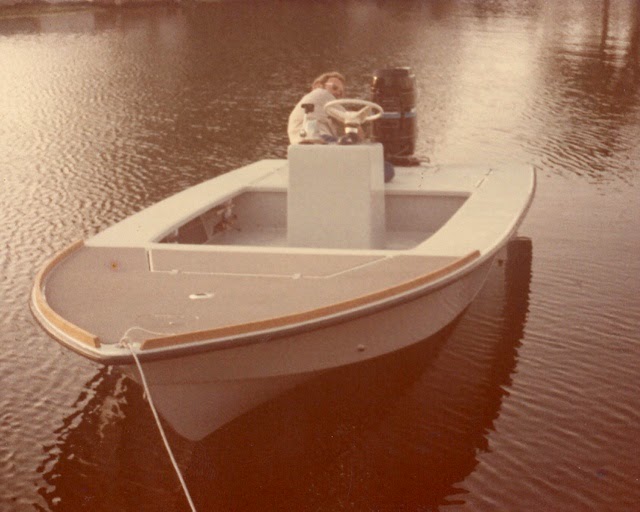 Charley Causey's hull just launched with Rick Justice who rigged it starting up the Merc. 1983. 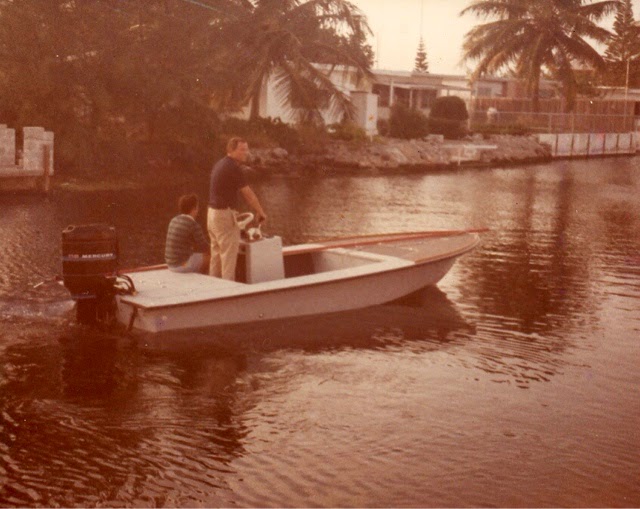 Charley and I going out for test ride. I ended up building 3 different skiffs for Charley over the years.This is the canal inPlantation Key in1983. 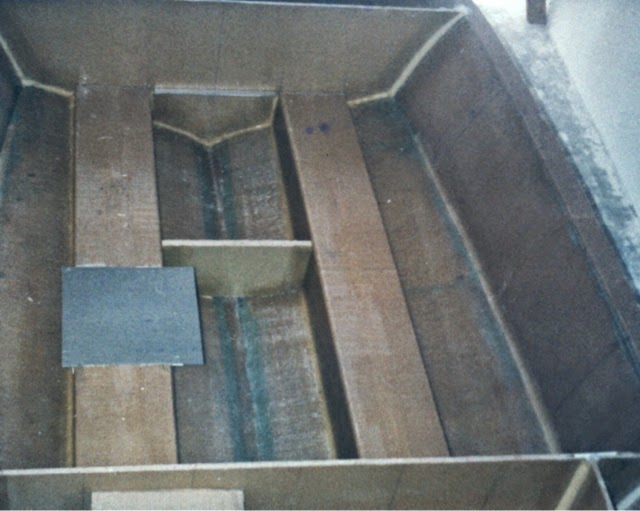 This is Carl Naverra's  all core skiff made up with all S- glass cloth and core. I believe this to be the first all core boat. 1984. 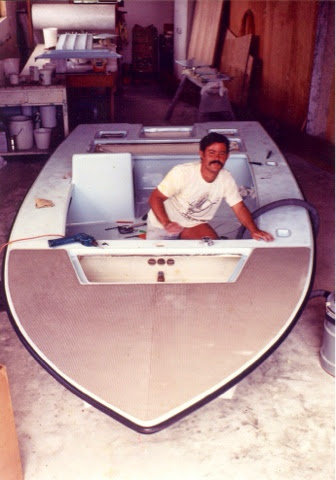 Here I am in1984 just moved into my new shop in Tavernier , Key Largo finishing off Carls all core skiff " Back lash" . One time a couple of clients were in the shop as I was working and one said to the other " boy you sure couldn't get a Cuban to do this kind of work" . I looked up smiling and said , " well you're getting half of one right now as my dad is Cuban !"
My mom was born in Sweden so I am a first generation half breed American. 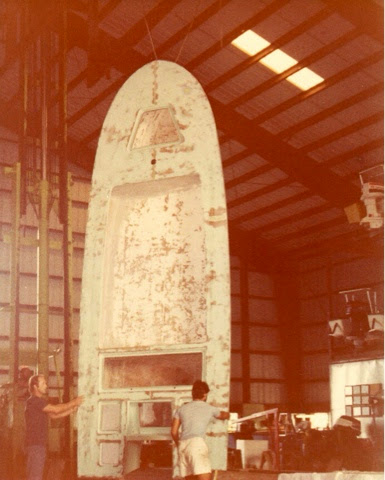 Hal Chittums Mako experimental skiff getting ready to flip over for painting. This boat was cored in all plywood. Weighed a ton .Thats Ray Dye and me in what is now the middle of World Wide Sportsmen's shop in Islamorada. 1982. 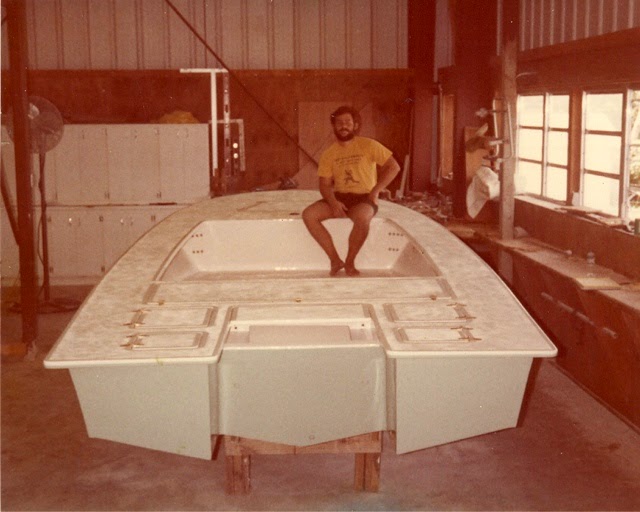 Hal Chittums Mako Experimental skiff finished waiting for Ray Dye to rig. I am 24 years old in this shot. 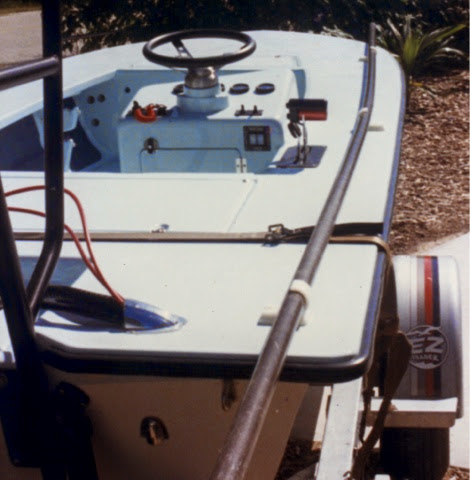 This is Sandy Morets all core Kevlar skiff one off that was finished in my new shop in 1986. 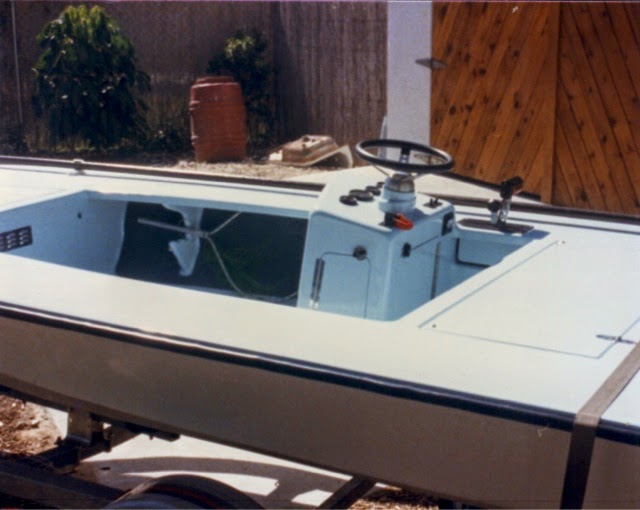 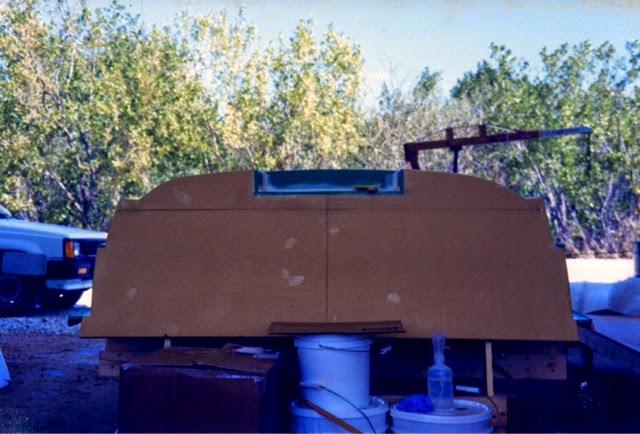 Stern shot of one off skiff that I designed and built for Charley Causey that is the predecessor to the Whip Ray. I built this boat in Marathon Florida Keys  in 1995. 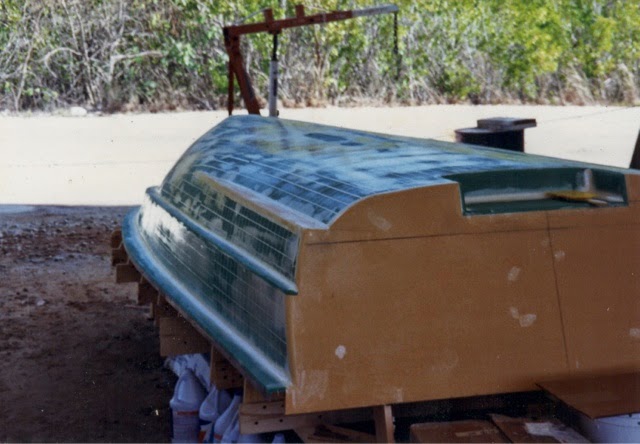 Whip Ray predecessor one off 1995 all core. 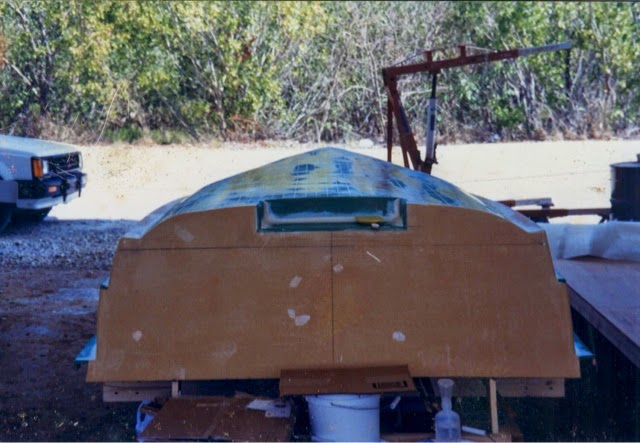 Whip Ray predecessor one off . 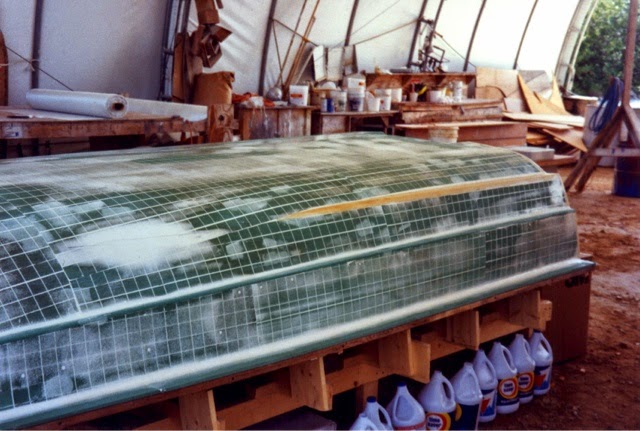 Whip Ray predecessor side view ready for glass skin. I built these one off skiffs from design to finish alone in 3 months time in very simple work shops so I feel everybody should be able to do the same with a little guidance . 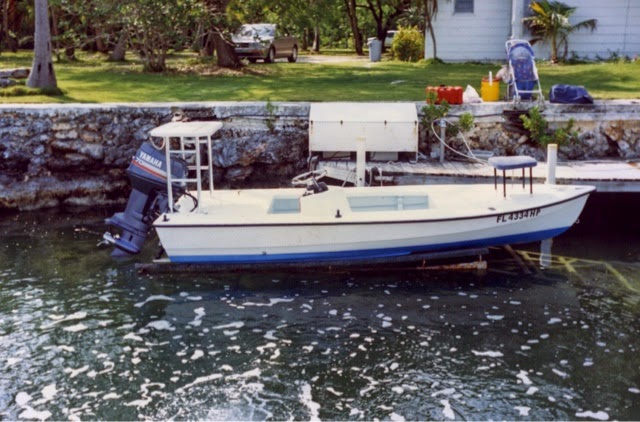 Finished skiff with a big ass motor on the stern 1996. This is the skiff that I told Hal Chittum and Flip Pallot to go for a ride in before we talked about their ultimate John Boat idea.This skiff cost fully rigged as a one off $ 20,000.00 . I have always built my skiffs on a set price and always made a living. The best deals out there today are used skiffs, but a one off can be built for a fraction of a new skiff if you have the inclination and drive.
More photos to come and Chapter 2 about my time at Hells Bay. Thanks to my daughter Lillian for helping me post these shots as all this computer stuff is way above my pay grade.
Posted by Chris Morejohn at 4:52 PM

I have one of your 1984 boats. if i gave you the serial could you give me info on its birth.