Fixing a hole in a boat.

This summer I met Bernie Evan Wong when racing RS Elite sloops at the Nonsuch Bay Resort.
I was bow crew sailing for a local English expat named Tony Sayer.
During the luch break I met Bernie and his daughter Sarah. We talked fishing and cooking fish. It got around to boats and stuff. Someone said I built boats and did repairs.
Bernies question was what I thought it would take to fix a hole in his Mumm 37' sloop.
So far the locals had been very diverse in quotes and advice in repairing this hole that had been caused when the crane that was lifting it had its wire break and thus dropped it onto a concrete dock piling.
The quotes ran from many thousands up to $10,000.00 US to fix with no real time frames.
Would I mine looking at it and giving some advice.
Sure 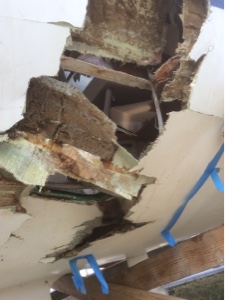 The boat was built by Carroll Marine in America to high standards. It is cored with balsa below the waterline and Kledgecell above. It was built in epoxy with varying unidirectionals.
I looked it over for a few minutes and then explained how I would do it and how long it should take.
My estimate was for less than 40 hours labour up to the finish paint coat.
Bernie asked if I would do it. Sure... Why not. But after I was done with the Wild Bird project. And only that as I wanted to be off sailing and Bernie had a waterfront lot full of boats needing work. I had not crewed for him at this time. 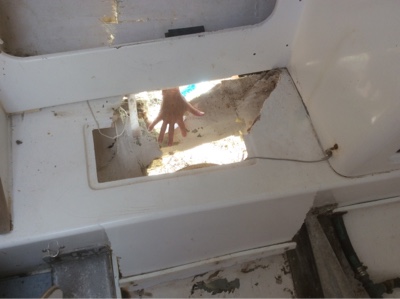 Rachel's hand sticking in from outside. Lots of cracks in the interior hull parts. 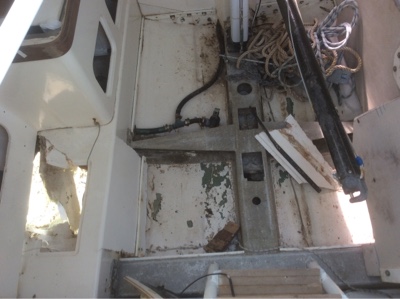 The floor has this aluminum grid to support the keel. The balsa core in the bottom is there because of its compression strength. I hate Balsa core as its always wet and rotting. This was the case here along the edges that were exposed by the new hole. It was wrecked like this right after hurricane Gonzalo so was almost a year old. 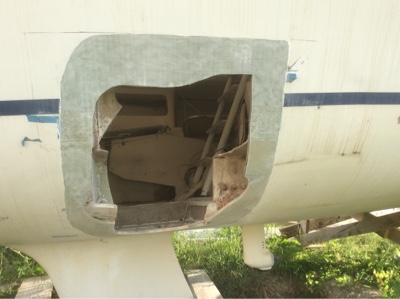 I cut out the dead core first. I ground the outside skin off to the second layer. This would enable me to be able to add back a new skin that would be flush with the old hull skin. 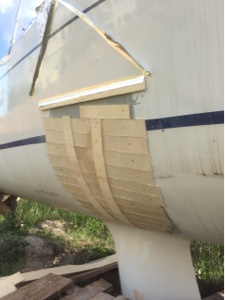 Now I screwed on strips of 1/4" plywood that is cut across the grain so as to be very bendy. This I screwed on with self tapping screws into the hull core and skin. The two outer strips are screwed from the inside out and help Fair the skin strips. The vee shape aluminum tape is my rain gutter drain to keep the water off my new hole. It rains here on some days for about 3 minutes on off all day long at intervals. It's a pain in the butt. But it worked. 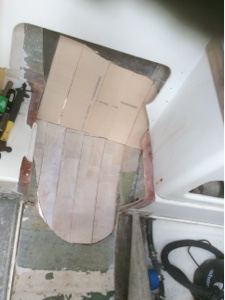 First I taped over the plywood skin with aluminum tape. The epoxy resin would not stick to this. I then glassed in on top of the taped outer skin the first inner layer of glass cloth. When wet I could fit it to the inside of the old cores edges to get a good seal.
I then let it cure. After wiping off the blush and then grinding I could then appy the new core.
Now I could lay in the new core both Balsa and Kledgecell on top of the outside skin.
This I glued down in epoxy glue.
I then let cure. After the core had cured to the new outter skin I then ground off the scrim and faired in the core to the existing hull. From there I glassed in the inside new skin that has huge overlaps on the old hull. 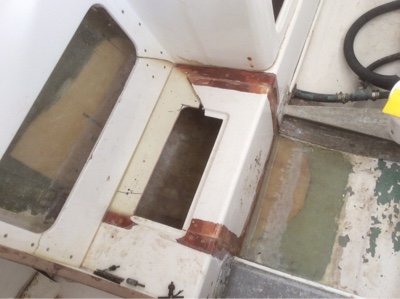 The interior bunk pieces that were there before were reglassed back in. I cut them loose to get at the hull where they had their cracks. They now just fit back in like a puzzle. 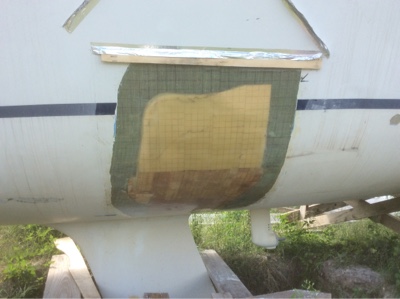 On the outside of the hull I then stripped off the plywood form strips and filled and faired the inner skin where it was touching the old hull skin. This was easy as everything is very clear to see through the resin. After this was done I then glassed a final layer of cloth over the whole ground area and over the inner skin. Before this epoxy cured I spread a fairing putty over this skin so as to have a perfect bond.
When this cured I faired the hull with a 7" foam pad using a Mikita variable speed grinder.
After this I sanded with a random orbital sander and then rolled on 3 coats of Awlgrip 545 primer. 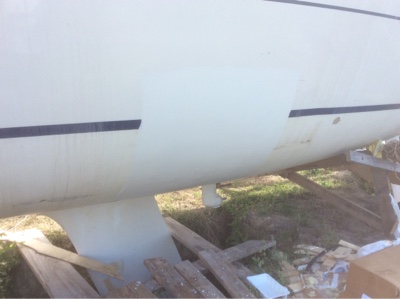