Thomas Hayes is a fourth generation boat builder from Florida. He has been working in the Fiberglass production boat building business for 18 years working in all phases of the fiberglass production of boats as a hands on builder to supervisor. He knows his trade very well.
I have had the pleasure of corresponding with him over this past year answering questions and giving my opinions and some advice on his personal project.
He started out just wanting to design and build his own skiff for himself and then two more for family. This project has grown from just a hull mold to now a finished complete skiff with all molds ready for production of many more.
Following are some pictures Thomas has been sending me of his skiff in progress.
He has not launched his skiff as I write this blog but it will soon be in the water.
Lots of new ideas being used here in his skiff. Look closely... As I feel lots of these ideas will be finding their way to Others new designs. 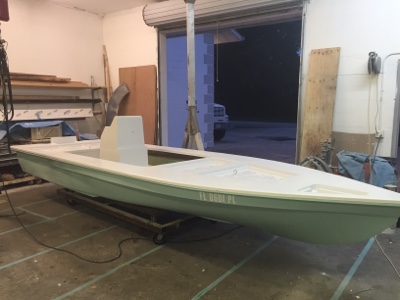 Here's his unnamed new skiff just pulled from the mold. For the underbody pictures go back and look at my old blogs about new skiffs. This looks to be the driest running skiff out there. Can't wait to see her running. 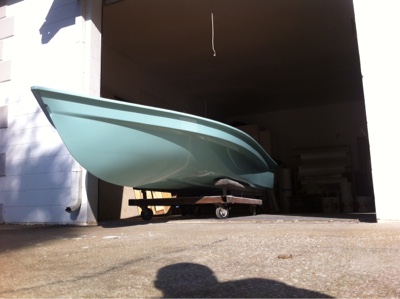 Huge bow spray rail and lots of underwater spray defectors.
Look at that bow over hang. This skiff will weigh around 600-700 lbs when finished. It's a nice big skiff. 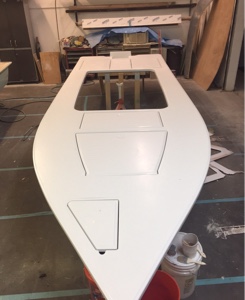 Here's the deck with all the hatches installed. No hinges on deck!!! All his hinges are hidden with his unique hinge system. It's very simple when seen. 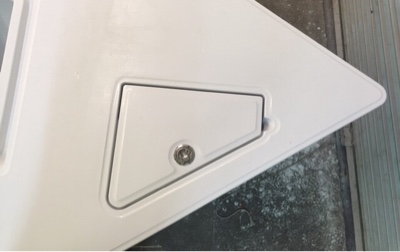 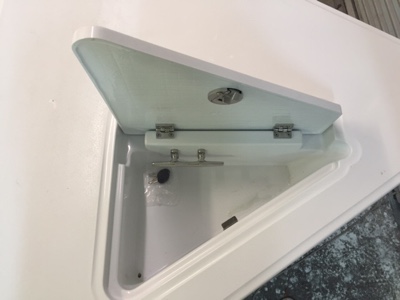 Bow hatch details revealed. How cool is this? 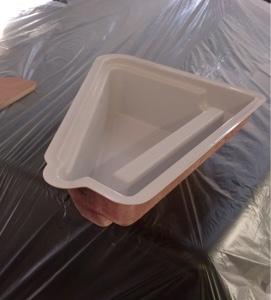 His moldings are as good as they get. 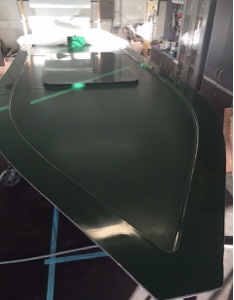 His deck mold has no hatches molded into it. This means that he can move his separate hatch molds where ever he or the clients want them. Look next to see how this works. 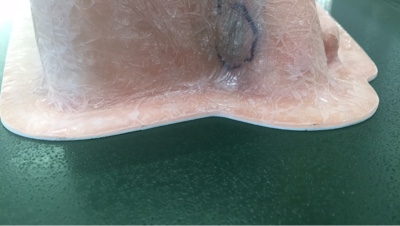 Because of his perfect moldings he just puts the finished part on the deck mold. He then gelcoats the deck around this part and when it cures this part is then glassed in as part of the deck. When it's all pulled out of the mold all he has to do is just trim and slightly buff in the transition edge of these two parts. To me this is brilliant. Saves having to make so many deck molds. Now you can have more shop space. 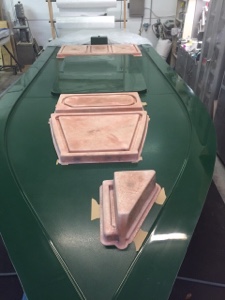 All hatch tooling parts in place here ready for the deck gelcoat and then glass work. 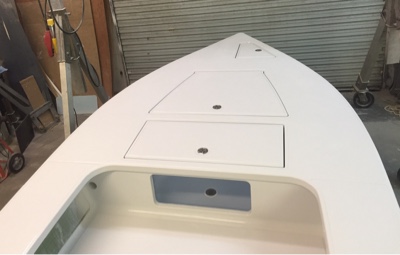 Now the deck is attached. The clear glass in the bulkhead is the side of the fish live well or bait well depending on what you're up to. This detail he saw in an old Cabo Boat and has carried it into his skiff. 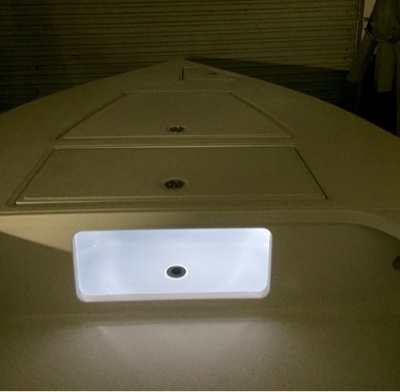 Won't that be fun to look at when its full of bait night fishing? The black ring is the drain. 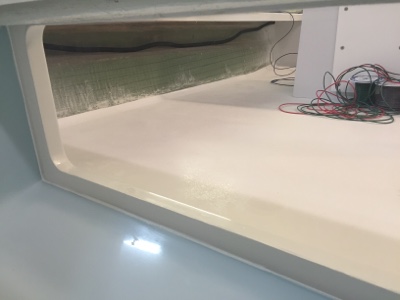 The not so fun side if you're the bait or the fish caught looking out into the cockpit. Look at the details and finish throughout. Top of the line. 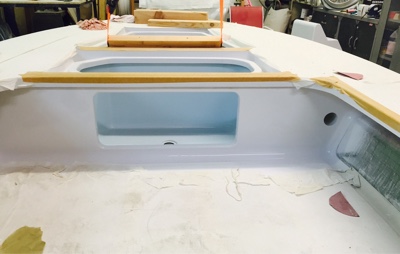 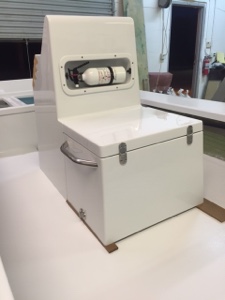 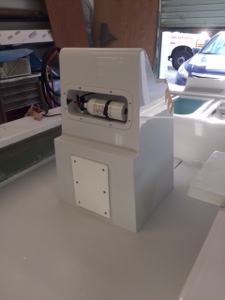 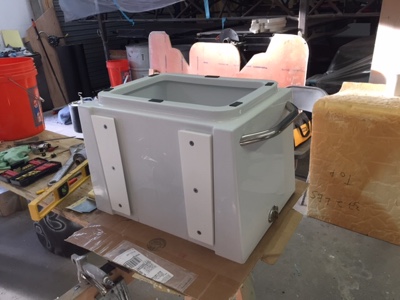 Removable cooler box.
Thomas says he has been influenced by early Hells Bay and Gordon Skiffs having owned an 18' Waterman and a Glades skiff.
He has put lots of effort and money into this project that has taken him a year of part time work. At present he says he has almost the same amount of $ in his first finished skiff here and all molds as a new store bought skiff bare hull.
But he now has the molds to build the next two that his family members want and then he will have to see if he wants to get in the market to build more for others.
Wait and see how this skiff performs. It might be the next " ONE" for you.
Thomas will always be able to say " Yes it's my own design and build" with pride.
There's nothing like being in a boat you built yourself.
Well done Thomas and good building to you a master craftsman.
Posted by Chris Morejohn at 6:40 AM

Any numbers as far as what it cost to build this skiff? Also what power, draft numbers, ride and poleabilty does she have? Also speed numbers. Confused at which direction to go in for my new skiff. I own a charter business in the lower Keys and have owned just about every pedigree skiff made including a Harry Spear. Looking for something that can handle chop, pole nicely, handle a 115 and have long enough legs to not have to refuel from a run from Summerland to the Marquesas and back chasing tarpon. Any advice would be much appreciated Chris or Thomas.. ,Thanks Jason Boneafide Charters