Blogs are for people like me to express their opinions, share ideas, and to give others a glimpse into their life.

Here I will start posting pictures of different sailboats from all over the world that have taken up the new trend and challenge of trying to carry everything they can with them..... But by stowing it on their decks.
As you have already read I do not like this trend for my own sailboat . I'm old fashioned in I like a clear deck and view of the sails when sailing. I have broken away a bit on this cruise by carrying a SUP paddle board on the side deck. The idea was for using it for exercise and to just paddle around all the inevitable mass of yachts that are anchored here in the West Indies. So far it's made a good spray shield as its on the port side and we are headed south . We will sell it when we head to Panama next winter as the sailing will be rougher and I will not want the extra wind age. It has been a lot of fun for us to paddle around amongst the yachties and shoreline so far . 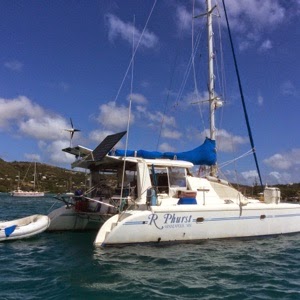 I call the new design trend of massive catamarans " Room-A-Ma-Rans".
These cats barely have enough wing deck clearance to qualify as a multi hull and not be called a Hickman Sea sled or a big Boston Whaler. Then they just keep on adding stuff to them. A friend of ours sailed his new Lagoon 62' catamaran across the Atlantic last year. He said it pounded so hard and so much the first time at sea all his head liner pieces that are held in place by Velcro would all fall down at once. Trying to put them back on was like putting a pizza back together except all the slices are a different shape. So they just sailed across and figured out where they all fit when they arrived in Grenada. The boat is up for sale now. 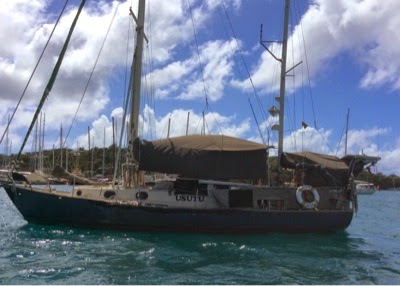 Steel Ketch with a weeks worth of stowing away on deck just to get going. 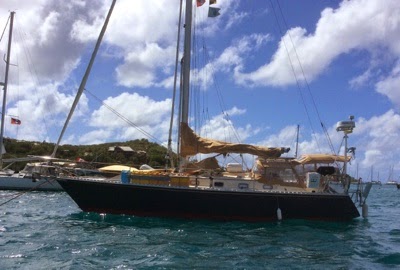 This is an American design and owned cutter- sloop. You can tell the American boats right off the bat because of all the yellow diesel jerry cans on deck. Americans always want to have enough diesel to motor across an ocean with. There is enough diesel on deck and below to motor with what is probably a 40 hp engine over a 1,000 miles there. Coming from Florida to Antigua where this boat is now, guaranteed that that they could motor the entire trip. Most likely motor sailed 90% so far.  I can't imagine that wind wane seeing any air when going to windward. The only place left for the rubber dinghy is the fore deck. Just think of what it will be like going forward in a blow with all this stuff to hike around. 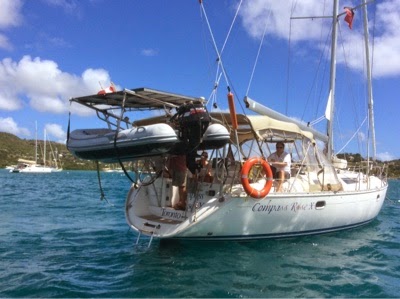 These Canadians have gone one step further and have extended the " Florida Rooms " side curtains all the way out to the sheer. We had some beers with these guys listening to them complain about their slow trip to wind ward. I wonder why? What I don't understand is that the real need for electric power is to feed the fridge and water maker. But if you are powering all the time why do you need all those solar panels ? I have yet to see a water maker that has lasted long enough to pay for itself . I will save my thousands of dollars and just get water ashore . We carry 200 gallons in two tanks that last us 30 plus days. So we have to do this around 12 times a year. No big deal. At a worst case price of $.50 cents a gallon that could come out to $1,200.00 a year but has never been more than $300.00. So try and get a water maker to match that over a ten year period. You will have to include its support team the batteries and engine too. We don't have a fridge either. Another story. 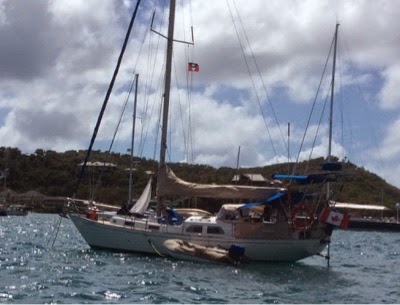 This old classic sloop has been upgraded to a two decker Bimini . Can't figure the logic on that arrangement. Kinda like the stern deck of a Chinese junk. 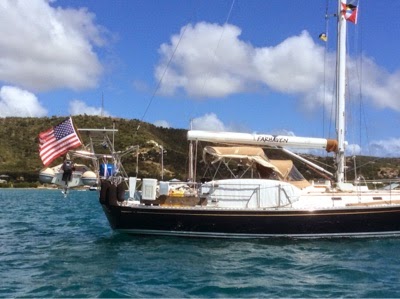 I call these Davits that carry huge dinghies, solar panels , Radar,life raft, and all the other things that are sold in the Yachting Magazines " Monkey Bars". I had lots of fun on these as a kid in school.
See all the diesel cans on deck. All this plastic stuff will be useless in a couple of seasons in the tropical sun. I have all my man over board and safety gear stowed below out of the sun till I have people on board . When I'm single handing who's going to throw that stuff to me. If I have to throw it to someone else I want it to be in good shape and not forgotten about in my stern deck garage going to rot in the sun. 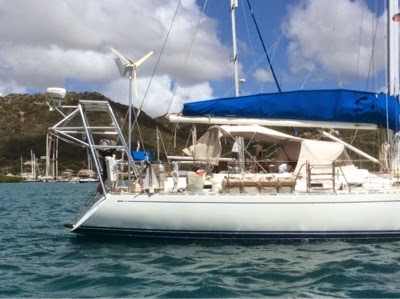 Yep.. Another American Sparkman and Stevens designed sailing machine that is totally ruined by all this deck crap that should be stowed below or do not have it at all. These boats are all being used by middle aged to retired aged couples. They are only doing short jumps and then just sit . So why carry so much diesel in a boat that was designed to sail to weather real well? "Honey this is a great sailing boat and I want to ruin it's safety and performance by carrying everything that's for sale in the sailing magazines. Trust me it will be fun trying to get around on deck and good exercise moving all this stuff just to clean up from under it." 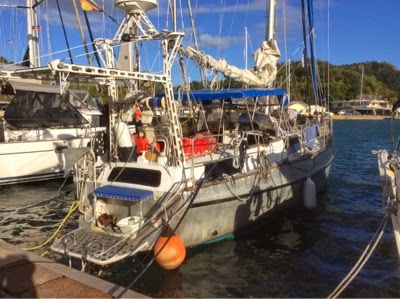 This boat gets the prize for having it all . The builder of this cutter in addition to being a welder must have went on a hole saw drilling spree at one time. I wonder if those holes make any noise in certain wind angles. I have a couple of small holes in my old radar post that sound like Peruvian flute players when the wind is up. I cover these holes with tape once in awhile as they seem to only play one melody. 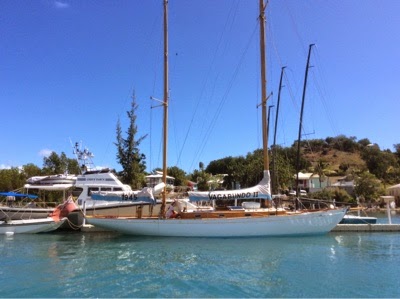 Just imagine putting all the above on this beauty. How they must have suffered all these years with out their Florida Room and garage deck space !

To me it's like marrying a super model and then asking her to wear a fanny pack ,a back pack , three sombreros , arm bands, and carry as many jerry jugs as she can and still expect her to draw envious glances from the crowd. Poor girl, sad boat.
I have never asked this of my beautiful wife Rachel . She just sails along as designed and built with me trying to keep up with her.
The Hogfish Maximus I have loaded down on many occasions by over 8,000 lbs of house building supplies and sailed her distances of over 400 miles in this state to get to our island house building site. She is designed to do this with ease.
I do not cruise and live aboard in this state though. 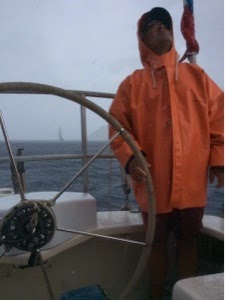 Here I am, in my orange FLORIDA ROOM, in a tropical rain shower sailing in the lee of Guadeloupe. Wild Bird is catching us . We always leave first as they are so much faster than us. 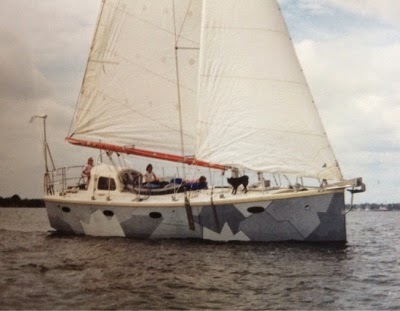 This is the Hogfish Maximus out sailing the first time with our camouflage primer coat on. The boom is orange- red because it's from a broken mast that I salvaged. The kids are on deck sitting in their kayak. The colors have changed, the kids have grown up, but the deck is still pretty much a clear space. We have just logged the 26,000 mile mark on Hoggy and I'm still as opinionated as I started out.
Boats rigged like the above photos do cross oceans but mostly by the easy down wind routes. Traveling to the Caribbean from North America they motor sail a lot staying in the comfort of their Florida Rooms burning fuel, making RO water that's only moisture ( you can't grow a plant with RO water) and having sun downer drinks with ice.( I have to wait for my sun downer ice when I get to port and have one with the locals.) They are seen motor sailing most of the time , and are the slowest boats around when sailing.
I will be posting more of these boats along with another category which I call the "stern deck extension."I believe this was started in Europe by an Italian that had run out of deck space so he just built on a stern deck. I have seen them sticking out over 8' off the stern with barbecue pits and couches on them .

Posted by Chris Morejohn at 3:37 PM