Rachel and Bequia our sea dog have finally made it back onboard the Hogfish Maximus joining us In St. Martin. Our daughter Kalessin and her boyfriend Pavlo flew in for a surprise visit so the boat was full. Kalessin has been working on mega yachts since high school and was in between jobs- boats. She met Pavlo over a year ago and they are very much a couple now. While she was here she was to have her 25 th birthday and also celebrate the fun fact that she spent her first Christmas in St. Martin on board our First Hogfish. Lots has changed since then. 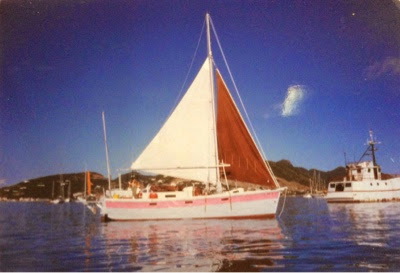 Hogfish at anchor on Christmas Day 1990 in St Martins Philipsburg bay with a second hand mainsail made from Jim Melchors Alerts old main. This is the only time I ever had it up.
Pavlo is from Zimbabwe in South Africa . He had just finished his test for Officer of the Watch and the two of them were in Ft. Liqueurdale looking for a yacht job that they both could work on instead of being two yachts passing in the Chichi night. I had not met Pavlo in person yet only via Skype.
It's pretty amazing what determined young people can accomplish today in work and travel. Kalessin has been to 45 country's so far on her own and Pavlo too.
The three of us had a few days together before rachel was to arrive. Pavlo grew up in a very interesting country with a very unsteady past as far as economics go. He is a very grounded individual because of this and to get on my good side right off the bat he slipped me a few $ to cover the expenses on board  for the next few days. 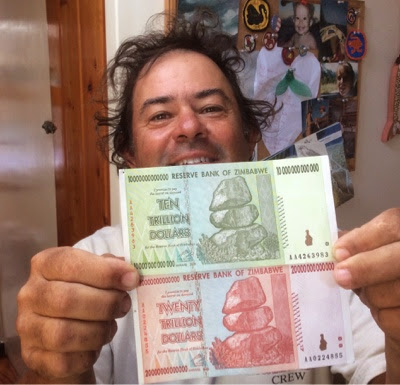 Nice guy giving me 30 trillion Zimbabwe dollars . These bills are real. I just need 30 trillion more to pay for dinner.
The day before Rachel arrived our old sailing mates Tim And Gayle Evans sailed in with their Trintella 43' ketch " Wild Bird" from Barbuda having just crossed the Atlantic from their home port in England. We had met them ten years before on the island of Madera. They had just rescued our dinghy from its own personal Atlantic crossing as Kalessin had not tied it up properly . We next met up a week later when we anchored in the little bay on Graciosa island in the Canary Islands. Tim and Gayle being at bit younger than Rachel and I give us so much energy with their enthusiasm for life. Weather it be projects, work, hiking , swimming, just being around them is life energizing. They were sailing on an old Prout 37' catamaran named " Grace May". We love to hike and mountain climb as do they . We ended up sailing in somewhat of company as their catamaran was faster than the Hogfish with us arriving behind them but with the added benefit of having them giving us all the scoop on what was up having arrived earlier . To even out the playing field in racing from one island to the next and across the Atlantic we came up with a score chart to add up upon arrival. This gave us a fighting chance to beat Grace May at times. Points were awarded and subtracted based on what was seen or done on the trip. Points were given for how many fish caught, whales seen, ships counted, birds named, the best tan, cakes cooked, and so on with points taken away for motoring, we only had an outboard , but they had a proper inboard. Points were also taken away for any yelling , so with our teenage daughter she cost us a few points in that department. This system worked out quite well as it was so much fun to go over all that we had seen and done when we next met up at our next landfall. Grace May always won over all but we were  very close behind. Grace May took 15 days to cross the Atlantic to our 18 days but when all was tallied up we only lost by 12 hours.
Last summer I got an email from them saying that they were to be sailing back across the Atlantic in their new boat having changed over to a monohull to carry more stuff. The new boat was built in Holland 30 some years ago and had teak decks that were worn out. "  Would I be interested in replacing some parts with new teak and removing all the rest and glassing over and painting ?"
" Sounds  great to us". So the plan was for us to sail down to meet up with them after hurricane season when they arrived over on this side of the pond. We would then go back to our routine of chasing them from port to port to mountain climb , hike and just adventure together. They were to store the " Wild Bird" in Grenada for the hurricane season on land and fly back to England to work over the summer while I did the job on the boat. Then after the hurricane season with both our boats all painted and ready to sail the plan is to sail down wind to Panama to explore via the ABC islands. From there we would sail on up island hopping to Cuba which has just opened up to me as an American and then on back home to our place in the Bahamas. At this point I would crew for  them back across the Atlantic to England or they would leave their ketch behind our house in Pelican Bay for the hurricane season for us to look after. As our kids are grown now we can just about do what ever we want so our plans will most likely detour a bit here and there. With Cuba being open I feel I will be sailing there for quite awhile as it has everything the carribean has but so much more. Plus my family history on my dads side goes back hundreds of years. 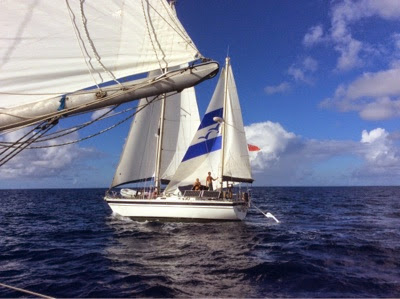 Wild Bird passing us to leeward.
With our kids aboard we immediately took off sailing to see SABA. 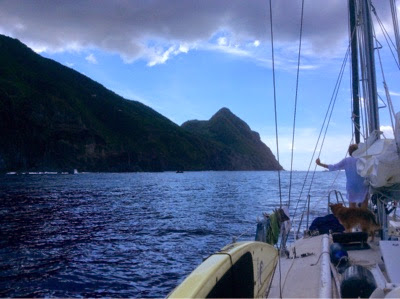 Motoring into the lee of SABA with a cloud that had run aground on top of the peak giving us shade. 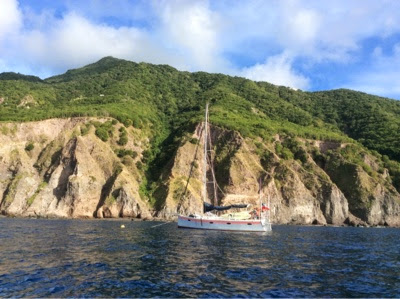 Clouds gone with one of the peaks above that we would hike up to . 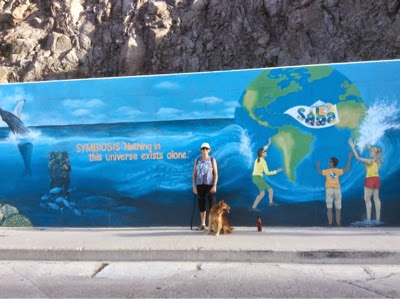 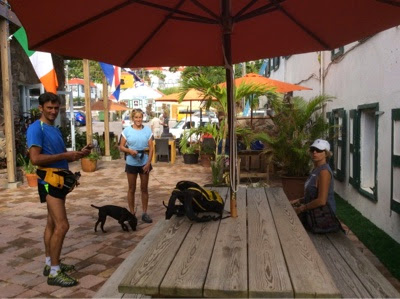 In town having a tea with Tim , Gayle and their pattengale Terriers Pip and Gem. Rachel in white hat. Tim and Gayle run in endurance races back home in all weathers so we're all kitted out in the right shoes and clothes. I normally hike up hill barefoot and then put my floppys on going down hill if it's rocky.
This is the Town of Windward. Very nice place. All the roads were made- poured in concrete. I can only imagine that a lot of this infrastructure was subsidized by Holland at one time. When hiking up the mountain you could see all the hand made terraced walls in rock that were once the subsistence level of farming that went on before tourism was invented. 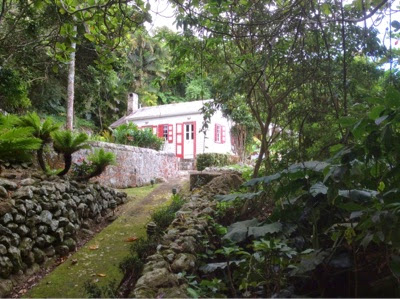 Starting the climb to the top of SABA with its 1064 steps and muddy trails going right up to 2987' to the top. 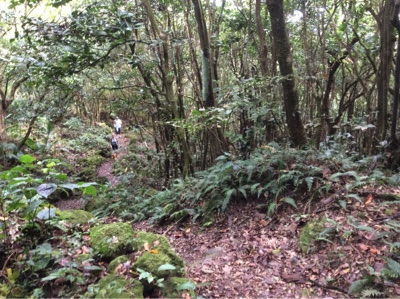 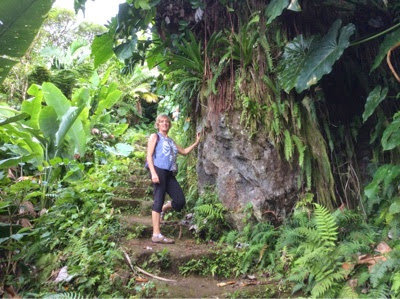 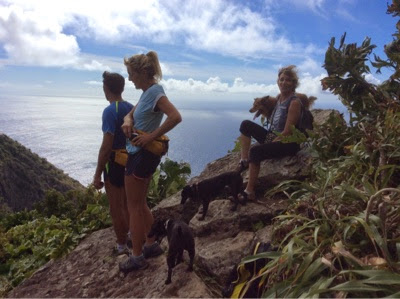 One small peak achived . Our dogs go with us on the islands that allow vaccinated dogs to go ashore on. 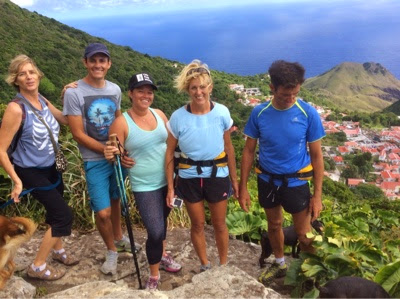 Rachel , Pavlo, Kalessin, Gayle and Tim with The town of Windward below. Only part way up. 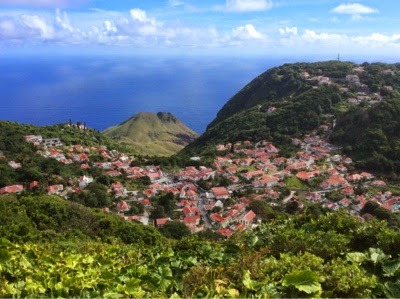 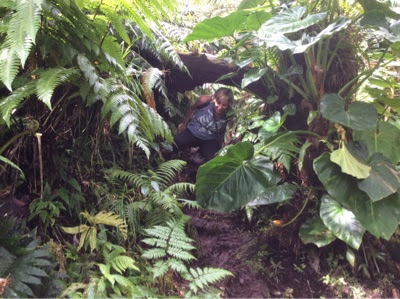 A bit slippery and muddy at times. 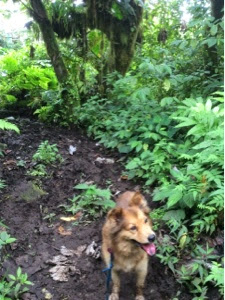 Bequia looking for the others to catch up. That an old growth Mahogany tree in the background. Kinda rare as all the original trees lower down would have been cut down to make room for farming ,lumber, and charcoal for cooking. Most trees you see near the water are only recent growth. 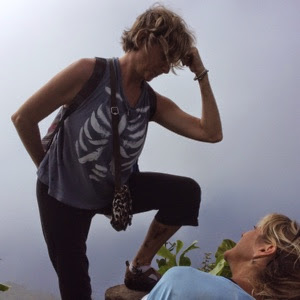 Rachel standing on top of the peaks marker. This island was a part of the Dutch empire once soo....they claim this to be the highest mountain in Holland. Looking down into the abyss with constant clouds passing by. Very cold at times. Almost 2,000' strait down from here. 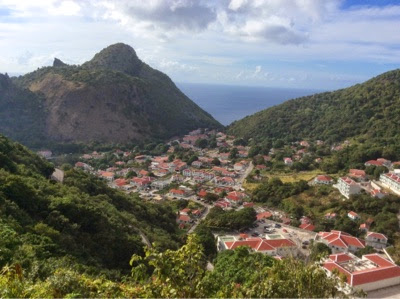 This is the town of " Bottom" with our boats , moored just over beyond the vee in the mountains.
Pavlo and Kalessin went scuba diving the next day doing two dives ,one to 40 meters. They are both dive masters . We snorkeled around with the water being perfectly clear with fish and turtles about and not sacred at all it being the island is all a park . This was so nice to experience seeing every thing so relaxed. The Bahamians need to think real hard about the future of their waters as its under huge pressure now and could end up like the islands down here that waited to late to stop all the killing.
Pavlo and Kalessin were continually networking via the net during this trip and landed a job where the two of them would be working on the same yacht so it was back to St Martin so they could jet off to their next adventure. What a life for them.
I'am saving the 30 trillion $ that I got from Pavlo to keep in my wallet in case I need to get out of trouble down here. Could come in handy.
Posted by Chris Morejohn at 6:03 PM